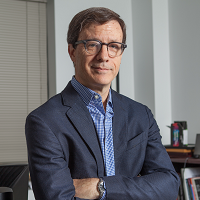 Paul has argued and won more than 40 cases that led to reported decisions for consumers, employees or whistleblowers, including one victory in the U.S. Supreme Court, and has won one or more cases in six of the U.S. Courts of Appeals and the high courts of ten different states. Paul’s Twitter handle is @FPBland.

Paul has worked with the organization since 1997, as a staff attorney until becoming Executive Director in 2014. He has presented at more than 100 continuing legal education or professional conferences in more than 25 states; has testified in both houses of Congress, several state legislatures and administrative agencies; has been quoted in more than 100 periodicals throughout the country and has appeared in several radio and TV stories. Most recently, Paul successfully argued before the Supreme Court in Home Depot, U.S.A. v. Jackson, 139 S. Ct. 1743 (2019) (neither the general removal statute nor the Class Action Fairness Act permits removal to federal court by a third-party counterclaim defendant).

Recognition of Paul from other organizations includes:

His other successful oral arguments include the following decisions: