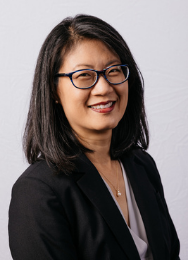 Victoria W. Ni, Director of Finance & Administration, is based in the Oakland, Calif., office of Public Justice. Prior to her current role with the organization, Vicky litigated a wide range of cases focused on protecting and ensuring the rights of consumers, workers, victims, and individuals with disabilities; free speech; and equal opportunity for women in athletics and in the workplace. She has also accepted increasingly senior roles in the management of the organization and was named Managing Attorney in October 2014 and Deputy Director in August 2017.

In her current role, Vicky ensures day-to-day operational, infrastructural, and financial efficiency of all parts of the organization to fulfill and advance its programmatic, fundraising, and communications functions. She has managerial responsibility for finance, accounting, human resources, information technology, and other administrative areas.