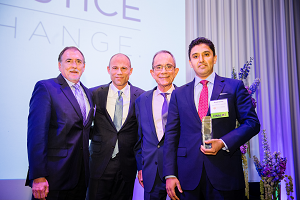 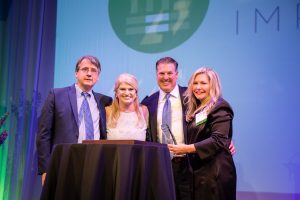 Public Justice’s 2018 Trial Lawyer of the Year award was awarded to two legal teams: one that won a significant jury verdict regarding faulty medical equipment that was marketed as safe despite the manufacturers’ knowledge to the contrary, and the other that ended fraudulent debt collection in Florida and reimbursed victims. The award was presented on the evening of Monday, July 9 at Public Justice’s Annual Gala & Awards Dinner at the Denver Center for the Performing Arts in Colorado.

Bahamas Surgery Center v. Kimberly-Clark was a class action lawsuit concerning MicroCool surgical gowns which were marketed as the safest and most protective gowns in the world, and were recommended for healthcare professionals working with Ebola patients or those performing surgeries on patients with HIV/AIDS or Hepatitis. However, the gowns’ manufacturers—Kimberly-Clark Corporation and Halyard Health, Inc.—knew as far back as 2012 that the gowns were defective and had failed numerous tests, but failed to alert the FDA, health professionals, or patients. Employees who knew too much were fired and the manufacturers even exploited the Ebola crisis to increase sales, selling millions to unsuspecting medical professionals.

When sued, Kimberly-Clark and Halyard paid their own lawyers more than $50 million trying to avoid accountability. They fought on every front, even seeking to disqualify plaintiffs’ counsel. Eventually, a unanimous jury awarded more than $454 million in punitive and compensatory damages against them.  The Centers for Disease Control and Prevention subsequently “quarantined” some of its own stock-piled MicroCool gowns and announced it had no intention of ever using them.

Inetianbor v. Western Sky Financial was a class action against predatory payday lender CashCall, notorious for charging excessive interest rates and then evading justice by forcing borrowers into a Native American tribal law-based arbitration system that, it claimed, was protected by tribal sovereign immunity and off-limits to American courts. One CashCall client, Abraham Inetianbor, already had a federal court order entered against him forcing him to arbitrate against CashCall when he contacted the law firm of Wallace & Graham for help. Using recordings of the arbitration, the firm persuaded the court to vacate its prior order. That ruling was upheld by the federal appeals court, allowing Inetianbor his day in court.

Critically, the ruling also enabled his counsel to challenge and stop a proposed settlement with CashCall in South Dakota that would have recovered $7 million for all claims nationwide. After they did so, state-by state settlements with CashCall were reached for more than ten times that amount. In Florida, for example, a settlement worth nearly $30 million was obtained. Coordinating closely with the Florida Attorney General and Office of Financial Regulation, the legal team won payment of fines and restitution to Florida agencies, $14,417,810 for the class members, and the voiding of thousands worth nearly $15 million. The defendants were permanently enjoined from future lending in Florida.

The other finalists for the award were Cote v. Wal-Mart, and Vang v. Prataya, read about the accomplishments of those finalist teams here. Information about previous TLOY winners is available here.