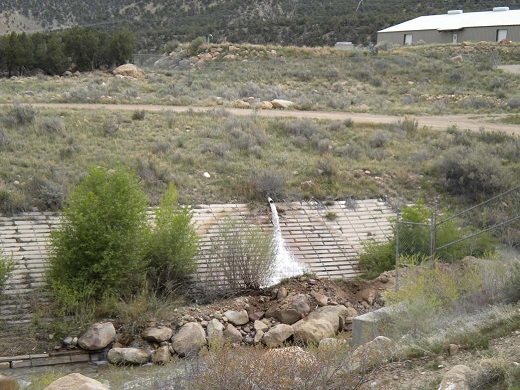 Until I saw it, it was hard to believe that in the heart of Utah, PacifiCorp, a local power company, was running a fake farm watered with coal ash waste that is toxic to plants and animals. When I finally got there, the farm had some grass on it and some irrigation equipment, but there was no sign of crop harvesting machines or animals. That is probably a good thing, because the water under the farm and the water used to irrigate it are both severely contaminated with toxic coal ash waste.

Why does PacifiCorp operate this farm at the Huntington power plant in the high desert south of Salt Lake City? Because it has been trying to avoid paying for proper water treatment and for cleaning up the pollution it is causing by exploiting loopholes in the law. The Huntington “research farm” was originally designed to avoid sending waste from the power plant into Huntington Creek. That, in turn, allowed PacifiCorp to avoid getting a Clean Water Act Permit for those waste streams and to avoid expensive water treatment.

Over time, the toxic water sprayed on the farm has incorporated more and more polluted water, greatly reducing, if not eliminating, direct discharges to the creek. It has conveniently, for PacifiCorp, also reduced or eliminated water treatment costs. Even though the streams polluted with coal ash waste were toxic to plants and not suitable for irrigation, PacifiCorp intercepted them and incorporated them into the irrigation for the farm. Needless to say, you don’t use toxic water on a farm designed to yield crops. The plan, instead, is designed to absorb pollution that PacifiCorp would otherwise have to pay to treat.

Even these sham farming activities, however, cannot hide the pollution PacifiCorp is causing at the power plant and in Huntington Creek. As we laid out in a notice letter we sent on October 15, PacifiCorp botched its coal ash disposal and management operations at the Huntington Plant from the start. As a result, the landfills containing coal ash have caused extremely high levels of pollution in streams, groundwater, impoundments, and irrigation water. Indeed, the levels of boron are the highest I have even seen on a coal ash site, and I have seen quite a few.

The net effect of this pollution is that two streams that should be discharging clean water to Huntington Creek have been deliberately cut off by PacifiCorp because they became highly polluted and unsuitable for aquatic life and wildlife. As a result of an elaborate engineering effort to intercept these streams and use them to irrigate the fake farm, these streams now discharge polluted water to Huntington Creek via groundwater. Thus, the coal ash disposal operations at the Huntington Plant cause pollution on the power plant site, deprive Huntington Creek of fresh water, add pollution to the Creek (even though it is listed as impaired for such pollution), and add toxic heavy metals to the Creek as well.

That’s why we’re filing suit. PacifiCorp can’t go on pretending that the pollution it has caused will go away if it’s recirculated around and around. PacifiCorp must clean up the site, cut off the source of coal ash pollution, restore the stream, stop pollution from the coal pile, and permit its discharges. It is past time to stop fake farming and get real about cleaning up the mess they’ve made.