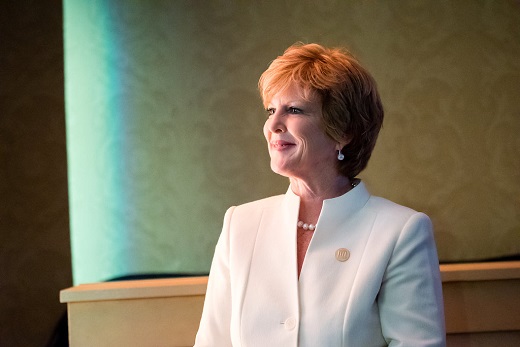 Public Justice’s new President, Anne Kearse, began her path to becoming one of the country’s leading plaintiffs’ attorneys on the front lines of the public interest movement researching and advocating for the New York Public Interest Research Group while working on her undergraduate degree in Consumer Studies.

Later, she worked as a litigation researcher and paralegal, first, for law firms representing school districts and building owners in litigation to remove deadly asbestos-containing products from their buildings. She then represented workers who developed deadly diseases as a result of working with these asbestos-containing products— a job that was both personally fulfilling and helped to build and hone her litigation skills.

“My early work included spending a lot of time digging through old files often located in old warehouses, buildings or attics. I also spent months researching, sorting through stacks of information at the Library of Congress,” Kearse recalls. “It gave me the opportunity to talk to workers and their families harmed by asbestos or other toxins and better understand the exposures and their risks.”

With two young children, and with the full support and encouragement from Motley Rice co-founder and mentor, Ron Motley, Kearse realized she could give even more representing victims as an attorney and enrolled into law school at the University of South Carolina. “I thought it important not only to research and find critical pieces of evidence, but to take those insights and use them as a voice for victims and their advocate in the courtroom.”

This embodied Kearse’s long passion for ensuring that everyone has access to justice and that our courts remain open to all. Now, she sees an opportunity on the horizon to advance that work even more significantly.

As Public Justice’s newly elected President, she sees opportunities to coordinate with members, allies and other supporters in ways that could make lasting, positive change while pushing back against those who oppose of access to the courts.

Collaboration and building on Public Justice’s past success are two of the goals she’ll focus on during her Presidency, which coincides with the organization’s 35th anniversary.

“I want to emphasize the great foundation built for this organization over the past 35 years,” she says, “especially by past Presidents of the organization. Given the strength of our docket right now, it’s the perfect time to do so.”

For Kearse, it’s also an opportunity to bring her involvement with Public Justice full circle. She first became aware of the organization through the work of Mona Lisa Wallace, a Public Justice past President, and legendary consumer advocate Joan Claybrook. Both continue to serve on the Board of Directors.

“The more time I spent around the board, staff and lawyers, the more I was inspired to make a bigger commitment and a bigger difference,” she says.

That includes ensuring Public Justice’s role as a leader among the array of groups who help preserve class actions, fight arbitration and end court secrecy. That work, along with battling other barriers to civil justice, is among the work she’ll focus on during her tenure as President.

For Kearse, the work at Public Justice is also a reflection of the issues she continues to tackle today as an attorney with Motley Rice.

Her practice at Motley Rice has continued her passion. Among those most personally meaningful victories to her is a 2002 verdict against chemical giant Union Carbide, holding the company liable for exposing workers to unreasonably dangerous conditions at five of its West Virginia worksites. She is particularly proud of representing family members of asbestos victims, who were exposed secondhand, and who sometimes didn’t develop mesothelioma until years after their family member stopped working in spaces contaminated by the toxic dust.

“If there’s one public misconception I would correct about asbestos, it is that it’s a thing of the past,” she says.

Kearse’s practice also includes a wide array of catastrophic injury, product defect and environmental contamination cases. Her focus at Motley Rice, she notes, mirrors a key tenet of Public Justice: taking on, and changing the behavior of, notoriously predatory industries.

Over the course of her Presidency, she’ll help guide the organization’s litigation, fundraising and advocacy work while also leading the Public Justice Foundation’s Board of Directors and Executive Committee.

“Anne is going to be an exceptional leader,” outgoing President Brad Moore said during Public Justice’s recent Gala. “She has so much energy, pizazz, passion and smarts. In short, she’s got exactly what it takes to help this organization imagine big things and then get to work on accomplishing them.”

For Kearse, it’s one more step on her life-long path of fighting injustice and standing up for those who have been wronged.