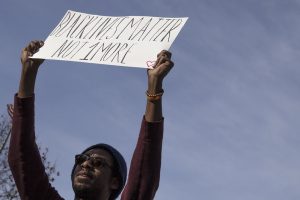 As our country begins, at last, to confront an epidemic of police brutality and killings that has destroyed families and lives for countless generations, a bipartisan and ideologically diverse coalition of advocates and lawmakers has started to find common ground on an important first step: Ending qualified immunity, the legal doctrine that has been invoked, again and again, to give police a pass for violence, injustice and murder that happens on their watch.

Under Supreme Court precedent, a victim of police brutality must demonstrate that, at the time of the abuse, the courts had already held that behavior to be unconstitutional. Too often, courts demand an exact match between the facts of the current case and facts of a previous case to show that it was already “clearly established” that the conduct in question was illegal. That can pose an impossible bar for many victims of police brutality. Plus, qualified immunity gives courts an out to avoid deciding whether police abuses were, in fact, unconstitutional—meaning courts are less likely to create that “clearly established law” necessary for future plaintiffs.

Earlier this month, Congresswoman Ayanna Pressley (D-MA) and Congressman Justin Amash (L-MI) introduced the Ending Qualified Immunity Act, which would clarify – and enshrine in law – that qualified immunity “does not provide police officers that brutalize or otherwise violate civil rights with defense or immunity from civil liability for their actions.” As Pressley and Amash correctly noted when announcing their bipartisan effort, “Qualified immunity shields police from accountability, impedes true justice, and undermines the constitutional rights of every person in this country.”

Today, Public Justice joins a broad coalition of allies, including Black Youth Project, the Center for American Progress, Lawyers for Civil Rights, The Leadership Conference on Civil and Human Rights and others, in calling on Congress to pass the Ending Qualified Immunity Act and restore accountability for police departments and officers across the country.

The urgent need for this legislation is made clear by a recent Reuters investigation, which found a dramatic spike in successful attempts by police to use the law as a shield from accountability: During a two-year span from 2005-2007, appellate courts ruled in favor of police in qualified immunity cases 44% of the time; just over a decade later (2017-2019), that grew to 57%.

We’ve seen, in our own cases, how police use qualified immunity to try and escape responsibility for their actions. We are currently co-counsel in a Third Circuit appeal concerning a police officer’s threats to break a car window and arrest someone in an attempt to help a debt collector repossess property without a court order. The officer is invoking qualified immunity to try to shield himself from liability. In 2016, we represented Maria Escamilla, whose son Rafael Solis was literally stomped to death while in police custody in Webb County, Texas. Today, we also represent Nelda Nuncio, whose son died after being denied critical medical care – despite repeated pleas for assistance from Nelda and her son’s fellow inmates – while being held at the same facility where Rafael died. In the first case, officers (unsuccessfully) invoked qualified immunity as their defense in Rafael’s death; they are expected to do so in the latter case once again. Sadly, despite our victory on behalf of Rafael’s family, courts have increasingly given police near-blanket protection under the doctrine despite the fact that Congress never authorized such broad and sweeping immunity from such horrible acts of violence. Such interpretations, Rep. Amash has said, are “…at odds with the text of the law and the intent of Congress.”

Indeed, the courts have strayed so far from the original vision of the law that numerous legal advocates, including Public Justice, recently joined what the National Review called “an extraordinary amicus brief filed by one of the most ideologically diverse groups ever arrayed on the same side at the Supreme Court,” making what the Review also characterized as a “profoundly true” case that “Qualified immunity denies justice to victims of unconstitutional misconduct. … imposes cost-prohibitive burdens on civil-rights litigants. … [a]nd …harms the very public officials it seeks to protect.” As National Public Radio’s Nina Totenberg reported this week, Justices on both sides of the ideological spectrum – including Sonya Sotomayor and Clarence Thomas, appear ready to revisit the Court’s 2009 decision that opened the flood gates to lower court rulings siding with the police.

As our cases have shown us, qualified immunity has increasingly become the go-to defense for police officers attempting to defend against reprehensible behavior and illegal actions that were never meant to be shielded under the law. As Congresswoman Pressley has noted, such abuse of the law “impedes true justice” by undermining the constitutional rights of those targeted, abused and murdered by police. And at a moment when our country is reeling from such abhorrent displays of brutality, applying the law in such a misguided way has national repercussions that cannot be ignored.

We agree, and that’s why we’re asking Congress and the Courts to step in, end qualified immunity and send a strong message that police do not get a pass when their actions imperil, endanger and even kill the people they are called to serve and protect. Until there is true accountability in our country, there can be no true healing or reform.

You can join us by finding your Member of Congress online, or calling the Capitol Switchboard at (202) 224-3121 and asking your Representative to join Congresswoman Pressley and Congressman Amash in ending qualified immunity once and for all.