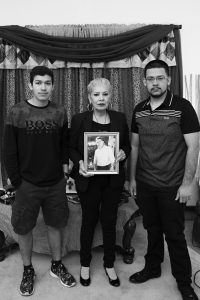 When I met Maria Escamilla at her home in Laredo, Texas last year, one of the first things she said to me was, “I’ve been waiting so long.”

At that point, it had been more than 6 years since her son, Rafael Solis, died while in police custody at the Webb County Jail in Texas. According to a coroner’s report, Rafael – a father of two who had been taken into custody on a non-violent charge – had been brutally assaulted by jailers who were supposed to be caring for him. In fact, the attack on Rafael was so vicious that the coroner ruled his death a homicide.

Yet, years later, no one had been held accountable.

When Ms. Escamilla fought back, demanding justice and accountability for her son’s death, the jailers appealed the charges against them. Justice for Rafael’s family was again delayed.

On April 12th, that all changed. The Fifth Circuit announced it was throwing out the jailers’ appeal and allowing the charges against them to move forward. This is a huge step forward in the fight to bring justice to Rafael’s family. At long last, those responsible for Rafael’s death can finally be held accountable.

In an op-ed published earlier this year in The Guardian, Ms. Escamilla wrote that Rafael “always made sure his two boys had a roof over their head, food on the table and everything they needed to succeed in school. He worked hard, driving 18-wheelers on long-haul trips across the country, so that his family would never have to do without.”

His death left his two sons, Rafael, Jr. and Esteban, without a father. And yet, despite the family’s grief, Ms. Escamilla wrote in The Guardian that, “If anything meaningful can come from his pointless and preventable death,” she was determined to make that happen.

Since Public Justice first joined our board member, Ronald Rodriguez, in fighting for Rafael’s family, nearly 10,000 people from across the country have signed Ms. Escamilla’s petition calling on the Texas Attorney General to investigate the senseless deaths happening in Texas jails. “There is something wrong here in Texas,” she said, “where non-violent offenders like Rafael, Sandra Bland and others are taken into custody and never come home.”

And while we cannot bring Rafael home, now – more than 7 years after he died on Valentine’s Day 2009 – justice is finally within reach for his family.