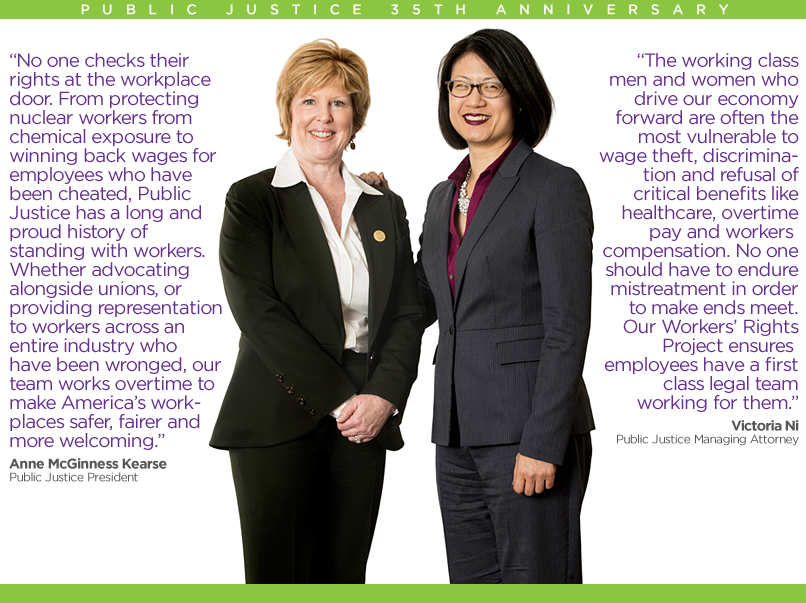 A recent study from Intuit predicted that 40% of Americans will be classified as “independent contractors,” or other freelance occupations, by 2020. As a result, from Uber drivers to the truck drivers that move our economy forward, more and more workers will have fewer and fewer legal protections for fair pay and treatment when they go to work every day. The misclassification of many workers as “independent contractors” allows corporations to avoid offering important benefits and protections. And some of the most vulnerable workers – low-income, and often minority, employees – struggle to hold employers accountable for wage and hour violations. And to make sure workers can’t enforce their rights, companies use fine print arbitration clauses in employment contracts to keep workers fighting for their rights from having their day in court.
Public Justice’s Workers’ Rights Project takes on cases to fight for workers’ safety, enforce minimum wage and other basic workplace standards, and protect employees from discrimination, harassment, and retaliation. Our litigation has exposed and stopped discrimination, changed unfair workplace practices, and won fair compensation for injured, low-wage, women, and minority workers on both an individual and class-wide basis. We’ve represented California port truck drivers, the men and women who literally keep our economic engine running, as they’ve fought employers’ attempts to deny them the fair pay they deserve. And just last year, we won an important victory on behalf of employees fighting racial discrimination at a west coast auto dealership. From standing with poultry growers in the south to fighting unfair arbitration on behalf of nightclub workers in San Francisco, our legal team ensures every worker, in every corner of the country, has a voice, and a champion, working for them in the courts.
____________“The working class men and women who drive our economy forward are often the most vulnerable to wage theft, discrimination and refusal of critical benefits like healthcare, overtime pay and workers compensation. No one should have to endure mistreatment in order to make ends meet. Our Workers’ Rights Project ensures employees have a first class legal team working for them.” – Victoria Ni, Public Justice Managing Attorney
“No one checks their rights at the workplace door. From protecting nuclear workers from chemical exposure to winning back wages for employees who have been cheated, Public Justice has a long and proud history of standing with workers. Whether advocating alongside unions, or providing representation to workers across an entire industry who have been wronged, our team works overtime to make America’s workplaces safer, fairer and more welcoming.” – Public Justice President Anne McGinness Kearse