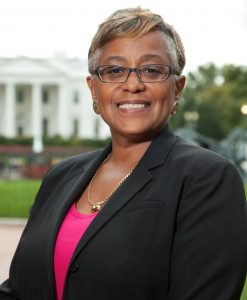 Public Justice is proud to announce this year’s recipient of the organization’s ‘Champion of Justice’ Award: Past President Sandra Robinson, an extraordinary leader within the legal community and a trailblazer who has spent much of her career advancing, and advocating for, opportunities and equality in the legal profession, especially for women and people of color.

Robinson, who served as President of the Public Justice Foundation in 2007-2008, made history as the organization’s first African-American President. She has also served as President of the Civil Justice Foundation, the Women’s Bar Association Foundation and the Trial Lawyers Association of Metropolitan, Washington, DC, in addition to having served as the co-chair of the National Bar Association’s Trial Advocacy Section, Program Coordinator of the National Association of Black Women Attorneys and a Master in the Charlotte E. Ray American Inn of Court, an organization which promotes the ethical and professional development of lawyers. She has also been a faculty member of the National Institute for Trial Advocacy.

“Sandra has spent her entire career breaking down barriers and working to ensure the legal profession reflects the diverse communities we serve,” said Paul Bland, Executive Director of Public Justice. “She is not only a fierce advocate for her clients, but is also an ever-present figure in the most important battles our country faces. Her commitment to equality, civil liberties and equal justice under the law is unparalleled and her dedication to ensuring our legal system lives up to its promise to give voice to the voiceless and a level playing field for everyone is inspirational to us all. She is, truly, a champion of justice. And at Public Justice, we’re proud to also call her a colleague and a friend.”

Sandra is the recipient of many distinguished awards, including the Marie Lambert Award for leadership given by the American Association for Justice Women Trial Lawyer Caucus, the Trial Lawyer of the Year by Trial Lawyers Association, DC and the Presidential Award by the National Bar Association (NBA) as well as the Charlotte E. Ray Award of the Greater Washington Area Chapter, Women’s Division of the NBA, named in honor of the first African-American woman to practice law in the United States.

Sandra has also been honored as a “Star of the Bar” by the Women’s Bar Association of the District of Columbia for her outstanding trial lawyer skills as well as her service to the community. The Trial Lawyers Association of DC Women’s Caucus renamed their annual award in Sandra’s name. She has been featured as a Distinguished Black Woman in the 23rd Annual Scholarship Calendar published by Black Women in Sisterhood for Action. She is also the recipient of the ABA’s Tort & Insurance Practices Section Pursuit of Justice Award and the Washington Bar Association’s Ollie May Cooper Award. The Black Law Students Association of the Catholic University Columbus School of Law named Sandra Alumna of the Year.

As her many leadership roles and awards suggest, Sandra has always made it a signature of her distinguished career to serve as a mentor and role model for the next generation. As a member of the DC and Maryland Bars, she has coached moot court teams in the DC Street Law Program, mentored students interested in the practice of law. She participates in Law Day programs at public schools and supports other public interest efforts.

Robinson will be presented with Public Justice’s ‘Champion of Justice’ Award during the organization’s Annual Gala & Awards Ceremony, being held virtually on Thursday, August 6, 2020. For more information, to become a sponsor or to purchase program book ad space to honor Sandra or others, click here.