President Trump Is Not Above the Law

President Trump Is Not Above the Law 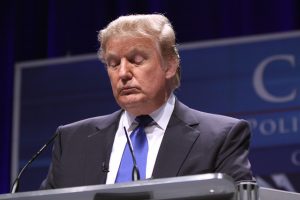 The Fourth Circuit’s decision blocking President Trump’s travel ban gets directly to the point. “The question for this Court,” it starts, “is whether the Constitution …remains a law for rulers and people, equally in war and in peace.” The answer is yes.

The Court rejects Trump’s claim that his travel ban is immune from “any review”— that the courts can’t consider (much less decide) whether it’s legal— and explains why it’s plainly unconstitutional. In so doing, the decision makes clear the truly disturbing danger we face.

America was founded on the principle that no one is above the law. President Trump doesn’t believe that. He proves it every week.

Last week, we learned Trump asked FBI Director James Comey to “let go” of the investigation of his national security advisor’s contacts with the Russians, requested Comey’s “loyalty” pledge, and fired Comey over “this Russian thing” when he didn’t get it. Trump then told the Russians Comey was a “nutjob,” shared sensitive information with them, and insisted he had the “absolute right” to do so.

This week, it’s the travel ban. Next week, who knows?

America is a democracy, not a dictatorship or monarchy. The U.S. Constitution ensures separation of powers because the Founders did not trust one person– or even one branch of government – to have absolute power.

But that’s what President Trump insists he has.

When his original travel ban was challenged, the President claimed his decision was “unreviewable.” He had the Justice Department argue (as it’s still arguing) that the courts could not consider the challenge—that they did not have that power. When the courts ruled against him, Trump advisor Stephen Miller said, “We have a judiciary that has taken far too much power…The whole world will soon see [that the President’s powers] will not be questioned.”

Trump believes this. Just look at his words and actions.

As a candidate, Trump called for a blatantly-unconstitutional “complete and total shutdown of Muslims entering the United States.” As President, he quickly issued what his advisor, Rudy Giuliani, said was designed to be a legal “Muslim ban.” No such thing exits.

Trump barred travel from seven nearly-100% Muslim nations. He gave Christians preferential treatment, despite the First Amendment. His order even violated the law it’s based on, which says, “No person shall … be discriminated against in the issuance of an immigrant visa because of … nationality, place of birth, or place of residence.” When the order was blocked, Trump issued what he called a “watered-down version” instead.

Campaigning, Trump vowed to “bring back waterboarding” and “a hell of a lot worse” because “torture works.” Federal law and international treaties prohibit torture. Within days of becoming President, ignoring those laws, Trump said he would “defer” to Defense Secretary James Mattis on whether to use torture.

Candidate Trump said that “nobody should be allowed to burn the American flag” and suggested “loss of citizenship” or a “year in jail.” The Supreme Court, including Justice Scalia, held decades ago that flag burning is protected by the First Amendment.

The Constitution doesn’t matter to Trump as President either.

Article I of the Constitution grants Congress the spending powers. Article II requires the President to faithfully execute the laws. The Supreme Court has repeatedly held that, when Congress has allocated funds, the President cannot constitutionally withhold them. The Court has also consistently held that, under the Tenth Amendment, “the Federal Government may not compel the States to enact or administer a federal regulatory program.” Trump’s unconstitutional “sanctuary city” order—which would deny federal funding to cities that don’t enforce federal immigration laws—does all of these things.

The Constitution’s “Emoluments Clause,” designed to prevent conflicts of interest, forbids the President, “without the consent of Congress,” from accepting “any present, Emolument, Office, or Title, of any kind whatever, from any King, Prince, or foreign State.” (An emolument is a payment or something of value.) Trump is openly violating it. When watchdog groups asked U.S. Attorney Preet Bharara to investigate, Trump fired him.

Instead of placing his assets in a blind trust to avoid conflicts of interest, like previous Presidents, Trump said “the President can’t have a conflict of interest.” Of course he can—and does. Why did his travel ban target countries where he has no business and from which no terrorists have killed people in America, but exempt countries where Trump has business and the 9/11 terrorists came from?

Trump still owns his businesses and is constantly promoting them. Trump’s son Eric says, “I think our brand is the hottest it’s ever been.” His daughter’s merchandise had record sales after Trump advisor Kellyanne Conway told the public, “Go buy Ivanka’s stuff.”

The lease between the U.S. and The Trump Organization to develop the Old Post Office Building in Washington, DC, says no “elected official of the Government of the United States” shall receive “any benefit” from it. But President Trump is and will— and thinks he can get away with it. The General Services Administration, which Trump oversees, just said he could. Ethics experts called this “unbelievable.”

Trump is acting like he can’t be touched. But he can be. Even if Congress and the Justice Department can’t or won’t do their jobs, Trump can still be held accountable—in the courts.

In the original travel ban appeal, when Trump insisted his power was “unreviewable,” the U.S Court of Appeals for the Ninth Circuit responded: “There is no precedent to support this claimed unreviewability, which runs contrary to the fundamental structure of our constitutional democracy.” The Fourth Circuit just agreed, rejecting “nonreviewability” as “a dangerous idea” involving “judicial abdication, especially where constitutional rights, values, and principles are at stake.” The courts barred the original ban and Trump’s “watered-down version,” too.

Lawsuits are now challenging Trump’s violations of the Constitution, the Post Office lease, and the federal laws governing regulations. More are surely on their way.

So Trump is trying to bully the courts.

When he lost one ruling, Trump attacked the “Mexican judge.” When his travel ban was blocked, he tweeted, “The opinion of this so-called judge is ridiculous.” He called the Ninth Circuit’s hearing “disgraceful” and its decision “so political.” His own U.S Supreme Court nominee, Neil Gorsuch, called these attacks “demoralizing” and “disheartening.”

That didn’t matter. When Trump’s “sanctuary city” order was stopped, he said that ruling was also “ridiculous.” He issued a statement saying the decision “unilaterally rewrote immigration policy” and was “one more example of egregious overreach by a single, unelected district judge.”

Expect more ahead. Trump has already called Chief Justice Roberts an “absolute disaster.” How long before he insults the Fourth Circuit, too?

The danger is clear. Judge Jay Bybee, supporting Trump’s travel ban, wrote: “Such personal attacks treat the court as though it were merely a political forum in which bargaining, compromise, and even intimidation are acceptable principles. The courts of law must be more than that, or we are not governed by law at all.”

But we are governed by law. President Trump needs to learn that. The courts must teach him a basic American lesson: In this country, no one is above the law.