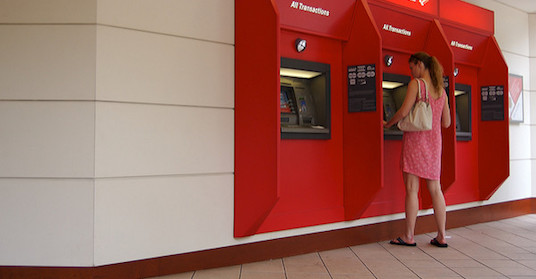 Last week, we filed an amicus brief in Visa v. Osborn, an important antitrust case pending before the Supreme Court. The story of the case—as alleged in the plaintiffs’ complaints—goes something like this: Long ago and (not at all) far away, in a time called “the Nineties,” nearly all ATMs were owned by banks. Those banks processed ATM transactions through networks they jointly owned and controlled—networks called Visa and MasterCard. (Yes, Visa and MasterCard were initially joint ventures owned by the banks, not publicly traded corporations as they are today.)

But the law was changing fast, and the banks were about to lose their stranglehold on ATM ownership. The banks were afraid that some young upstart would enter the ATM market and woo away all their customers by charging lower ATM fees. So the banks used their ownership over Visa and MasterCard to pass a rule requiring ATM owners to charge the same fees to customers, regardless of whether they used the pricey Visa and MasterCard networks or other, cheaper networks to process ATM transactions. This allowed Visa and MasterCard—which, again, the banks owned—to continue to charge high processing fees, without opening the banks themselves up to price competition from upstart independent ATM owners using cheaper networks.

And everyone was happy. Everyone, that is, except the independent ATM owners, who were hamstrung in their ability to compete with the banks . . . and the ATM customers, who had to pay higher ATM fees. But the banks, the banks were very happy indeed.

If this seems like a giant antitrust violation to you, you’re not alone. That is precisely what the plaintiffs in Visa v. Osborn claim. They contend that preventing ATM owners who process their transactions through cheaper networks from passing those savings along to their customers is, essentially, illegal price-fixing. The banks argue that they acted legally because there was no agreement between them to fix ATM fees, as would be required to demonstrate an antitrust violation. Rather, the banks contend, Visa and MasterCard—acting as separate entities—simply happened to believe it was in their best interest to pass rules with the effect of price-fixing, and each bank simply happened to make the independent decision that it was in its best interest to adopt those rules.

Thus, the case appears to raise a straightforward question of antitrust law: Is price-fixing somehow immunized from antitrust law, simply because it’s undertaken through a “joint venture,” rather than directly? In two excellent briefs—one on behalf of ATM customers and one on behalf of independent ATM owners—the plaintiffs convincingly argue that the answer to that question is as obvious as it seems: Of course not.

But because of how the case came to the Supreme Court—via a challenge to the adequacy of the plaintiffs’ complaints—there is another important question lurking in the background: What must the plaintiffs have pled—that is, what did they need to allege in their complaint—to convince a court that their claim was “plausible”? (Thanks to a previous decision of the Roberts Court, the vague notion of “plausibility” is now the standard that governs whether a plaintiff will have the opportunity to try to prove her claims or whether, instead, the defendant can get the claims thrown out of court at the outset, without even having to say whether or not they’re true. The imposition of that standard upended over fifty years of Supreme Court precedent holding that a plaintiff’s complaint would only be dismissed at the outset if there were no set of facts she could prove that would entitle her to relief.) Because the pleading standard governing antitrust cases is the same as that which governs most other lawsuits, anything the Court says about that standard here is likely to have far-reaching effects.

The banks and their amici—including, of course, the Chamber of Commerce—argue that the Court should use this case to once again raise the bar on what plaintiffs must plead in their complaint just to get into court in the first place. (Fun fact: According to a recent Public Citizen report, while the Chamber spends tens of millions of dollars a year trying to keep consumers and workers out of court, it files a brief or lawsuit on behalf of corporations almost every other day.) They contend that defending a lawsuit costs corporations money, and so the Court needs to protect big corporations from scary, scary lawsuits, by making it harder for people to bring them in the first place.

As we explain in our amicus brief, this argument is preposterous. For one thing, there is no evidence that meritless lawsuits are a significant problem (and, of course, not even the Chamber of Commerce argues—at least, not explicitly—that the Court should throw out meritorious claims). And even if frivolous lawsuits were a substantial problem, raising the pleading standard wouldn’t actually help. Scholars have found that heightened pleading standards do not filter out meritless claims. Instead, they disproportionately filter out civil rights and employment discrimination claims, as well as claims brought by individuals (as opposed to those brought by corporations or the government)—regardless of the merits of those claims. It’s easy, then, to see why big banks might want heightened pleading standards—not because of meritless lawsuits, but because of meritorious ones. If it’s harder for individuals to bring claims, it’s harder for people to sue banks when they break the law.

Heightened pleading standards are great for corporations. For everyone else, not so much. Our amicus brief explains why the Court should refuse to impose them, both as a matter of policy and because that’s what the law requires. You can read the entire brief here.