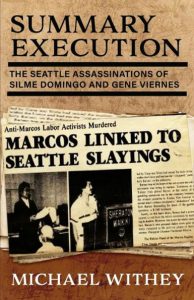 Michael Withey’s experience in Summary Execution: The Seattle Assassinations of Silme Domingo and Gene Viernes began with a shock: the brazen broad-daylight slaying of his two friends outside the Local 37 Cannery Workers Union where they were labor leaders. At the time, Withey could not have known how this terrible crime would lead to an even more shocking revelation of international intrigue. Reading at times like a spy novel, Summary Execution covers a conspiracy linked to Cold War politics, dictators, and international espionage. Withey was able to successfully navigate these forces and achieve courtroom justice for Silme and Gene through tremendous personal dedication and innovative legal strategy.

Attorney and activist Withey was the lawyer for the Local 37 at the time of the killings, and worked closely with the family and friends of the victims. Together they formed the Committee for Justice for Domingo and Viernes (CJDV) to seek answers and justice. Their mission would take them from Seattle to Alaska, and from the Philippines to DC, and ultimately resulted in an unprecedented verdict against a foreign head of state, and millions of dollars in restitution to the families of Silme and Gene.

Withey explains how the union represented Filipino immigrant workers in Alaskan salmon canneries, and the pervasive presence of gangs and violence in the Filipino labor community. Not only active in labor politics, many Filipino laborers were closely tied to the politics of the Philippines under Ferdinand Marcos’ military dictatorship. The regime was supported by the Reagan administration as bulwark against communism in Southeast Asia, but was very sensitive to opposition movements in the United States. It would quickly become apparent that the murders were not about the gangs surrounding the cannery workers, but rather about Silme and Gene’s leadership of anti-Marcos activists and their connections to the labor movement in the Philippines.

The CJDV assisted the local Seattle authorities convict the gunmen who carried out the murders, but encountered resistance when they sought to get the leaders of the conspiracy prosecuted under the theory of a Marcos regime connection. Withey and the CJDV therefore turned to the civil courts to seek justice, and found themselves in the middle of bizarre web of intrigue – from a surprise witness who claimed to be Howard Hughes’ bagman, a military intelligence operative who gained access to government reports on Gene’s activities in the Philippines, and eventually the revelation that Philippine government operatives had been closely monitoring and harassing his opponents in the U.S. Withey even found himself personally staking out a key accomplice to the murders after he successfully evaded a SWAT team.  Then-Trial Lawyers for Public Justice, now Public Justice Foundation, was enlisted in the justice efforts. TLPJ, through its then-Executive Director Arthur Bryant, enlisted as co-operating counsel the experienced former Watergate prosecutor Richard Ben-Veniste whose office provide valuable resources in scheduling and taking the depositions of key US intelligence agencies, including the FBI, DIA, CIA and NSA.

Summary Execution shows how Withey and his team overcame legal hurdles in seeking civil justice against a foreign government under the Foreign Sovereign’s Immunity Act. It also details fascinating episodes, such as the daring service of notice to Marcos during a state visit to Washington, DC, and the rapid political developments in the Philippines that converged with their efforts to bring Marcos to justice. Marcos eventually fled to Hawaii after a national uprising, bringing a trove of financial documents that Withey was able to subpoena.

Withey was eventually able to depose Marcos himself, and carried on the case even after the former dictator’s death from illness. Thanks to the subpoenaed documents and Withey’s skillful depositions, the team was able to prove the conspiracy to the jury, which found Marcos and his wife liable for the murders. They awarded Silme and Gene’s estates $15.1 million, and the judge found Marcos’ accomplice in the U.S. liable for $8.3 million. As appeals continued, they settled with the defendants for $3 million.

Withey’s book illustrates the importance of the civil justice system, even in cases that begin with a criminal act. Civil remedies are especially important when state authorities are unwilling to go after higher ups due to political pressure. If not for Withey and the CJDV’s dogged combination of activism and legal work, Silme and Gene would have never gotten the full justice they deserved.

Unfortunately the story is not yet done. The case revealed that the federal government participated in Marcos’s infiltration and monitoring of U.S.-based opponents to his regime. Withey is still seeking information about the full extent of American intelligence agencies’ participation in the scheme, and has encountered resistance to his Freedom of Information Act requests. Still, he perseveres, and the quest for justice continues.

Copies of ‘Summary Execution’ are now available for pre-order from Barnes & Noble and Amazon.com.