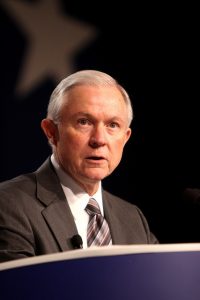 “People are policy,” President Ronald Reagan use to say. It’s a refrain you hear again and again in Washington. And, to a large extent, it’s true. Whenever the White House changes hands – and brings new leadership to the federal agencies – policies change, too. By any measure, the policy changes in the new Trump administration are radical. The administration has started to quickly and aggressively transform the positions federal agencies take on a host of critical issues.

The latest example of the government’s hard-right turn came just days ago, when we learned that the Department of Justice is very likely to shift its stance on the rights of transgender students – young people at high risk for being bullied and harassed – to use school restrooms that correspond with their gender identity.

At issue is policy guidance issued by the Obama administration that directs schools to allow transgender students to use the bathroom of their choice. The Obama administration took the position that barring students from ­restrooms matching their gender identity was a violation of Title IX, the federal law prohibiting sex discrimination in schools that receive federal funds. And the Department of Justice was objecting to a court order that blocked the guidance from being enforced in schools nationwide.

But the Justice Department recently filed a brief withdrawing its objections to that order. As The Washington Post recently noted, this move “suggests that the Trump administration will take a different approach” to the issue of transgender rights. The result could be harmful to transgender youth, giving a veritable green light to discrimination and harassment on school campuses across the country.

Civil rights for every American should be the one area where the Justice Department – tasked with defending such rights – has a consistent position. But just two days after Alabama Senator Jeff Sessions was confirmed as Attorney General, the Justice Department signaled that it’s likely to step back from the bedrock idea of “equality for all.”

Given Sessions’s track record on LGBTQ issues while in the Senate, it’s not hard to imagine where the Justice Department is headed. Senator Sessions aggressively opposed efforts to prohibit employment discrimination against LGBTQ people, railed against the idea of allowing LGBTQ Americans to sponsor their foreign-born spouses for immigration purposes and even voted against hate crimes legislation – now law – that includes the LGBTQ community.

Attorney General Sessions appears to be launching his tenure with more of the same. And just as the country swiftly proved Sessions to be on the wrong side of equality for lesbian, gay and bisexual people, it will show how out-of-step he is with the country, and the courts, on issues of transgender equality, too.

Protecting people’s civil rights is a fundamental value in American society. This is especially important when it comes to ensuring that more vulnerable people, including our nation’s youth, are protected under the law. It’s not just wrong – legally and morally – for the federal government to be advocating discrimination; in the case of young people who are already vulnerable and at-risk, it’s downright dangerous.

In a case that will be directly impacted by the Justice Department’s position, later this year, the U.S. Supreme Court hear the case of Gavin Grimm, a transgender boy whose Virginia public school barred him from using restrooms for male students. Grimm sued, and the Fourth Circuit Court of Appeals sided with him, but his local school board successfully pressed for review by the Supreme Court.

Public Justice is proud to be working, as part of a broad coalition of civil rights groups, on a brief supporting Gavin and transgender students across the country. Schools are no place to discriminate, and school boards should not be in the business of teaching intolerance. Title IX – which has been used to break down gender barriers in sports and help students fight back when schools fail to respond properly to sexual harassment and violence – demands that Gavin and other transgender students have equal access to an educational environment where they feel welcome and safe.

The concept of equality can, and should, cross partisan lines. President Trump, who appointed Sessions to lead the Justice Department, once famously said that Caitlyn Jenner – the Olympic gold medalist who recently came out as transgender – is welcome to use the women’s restroom at Trump Tower. That same standard of acceptance should apply to all transgender people, whether they are an Olympic champion, like Jenner, or a transgender student, like Gavin Grimm. Every person in this country should be able to live their lives, without fear of discrimination.

That should be true in Trump Tower, and at school, too.