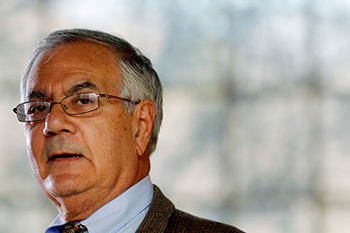 Public Justice is proud to announce that former Congressman Barney Frank will receive the organization’s Champion of Justice Award for his exceptional leadership and advocacy on economic justice and civil rights.

After graduating from Harvard in 1962, Frank worked there as a teaching Fellow in government and Assistant to the Director of the Institute of Politics at the John F. Kennedy School. In 1968, he became Executive Assistant to Boston Mayor Kevin White. He then spent one year as Administrative Assistant to Congressman Michael Harrington.

“We are honored to recognize Barney Frank for his incredible work,” said Paul Bland, executive director of Public Justice. “As one of the chief architects of the landmark Dodd-Frank bill, Frank played a pivotal role in responding to the economic crisis of 2008 and ensured safeguards were put into place to help prevent future crises. This critical legislation has increasingly come under attack from some Members of Congress, but remains one of the most important pieces of consumer protection legislation ever passed into law. Because of Frank’s leadership, millions of Americans are now protected from the rampant fraud and abuse that devastated the housing market and cheated millions of investors out of their savings.”

In 1987, Frank became the first Member of Congress to acknowledge voluntarily that he was gay, and 2012 he was the first Member of Congress to marry a same-sex partner while still serving. He was lead champion for the Employment Non-Discrimination Act (ENDA) while serving in the House and was a vocal proponent of marriage equality and repealing the military’s “Don’t Ask, Don’t Tell” ban on lesbian, gay and bisexual service personnel.

“Congressman Frank was at the forefront of the fight for LGBTQ equality,” said Bland. “Though our country has yet to fully realize his vision of a nation free from discrimination and anti-gay animus, his leadership on these issues has been instrumental in securing the remarkable gains the LGBTQ community has made in recent decades.”

Frank lives in Newton, Massachusetts and Ogunquit, Maine with his husband James Ready.

Public Justice will present Frank with the 2017 Champion of Justice Award during the organization’s Annual Dinner & Awards Gala on Monday, July 24th in Boston. For more information, or to purchase tickets for this event, click here.