Being Arrested Doesn’t Take Away Your Consumer Rights 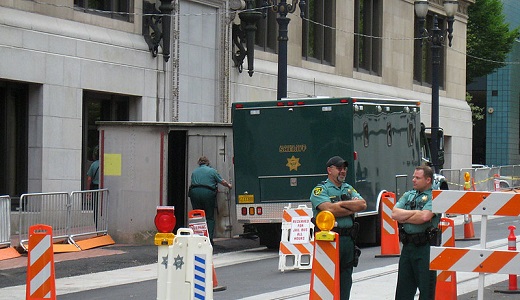 Being Arrested Doesn’t Take Away Your Consumer Rights

Appeals Court Deals a Blow to the Prison-Industrial Complex

On any given day in the United States, some 2.3 million people are locked up between state and federal prisons, local and county jails, and immigration detention centers. That’s more people behind bars than any other country in the world. But that astonishing total actually undercounts the number of people who are detained: some 10.6 million people come in and out of jails each year, many staying only long enough to make bail. Those who are too poor to afford bail remain in jail until they either stand trial or a judge decides they can be released. The Prison Policy Institute estimates that 70% of those in jail at any given time are not convicted of a crime.

All of this incarceration is big business. State and local governments have contracted with private companies to run various facets of their systems, from medical care to phone calls and video visitations with families and friends on the outside. Immigration detention centers, though ostensibly run by ICE, have been almost entirely outsourced to private operators.

These private-public partnerships benefit cash-strapped state and local governments by taking complex and expensive tasks off their hands. And the benefits to the companies are obvious: access to a literally captive market with nowhere else to turn if the service is poor or the fees are too high. The results?

The profiteering doesn’t end when a person is released from custody. Traditionally, jail and prison administrators determined how much money had been confiscated upon a person’s arrest, and would return that money to the person leaving custody in the form of cash or a check. But this function, too, has increasingly been turned over to private companies, and those private companies control the form that money takes.

What that means in practice is that instead of receiving cash, people leaving jails, prisons, and immigration detention centers throughout the United States leave with a piece of plastic: a prepaid debit card emblazoned with a Visa or MasterCard logo. The terms and conditions of using these release cards, and the fees associated with them, are more onerous than any gift card sold in retail stores, because unlike people buying prepaid cards in CVS or Target, the people getting their own money back on release cards don’t have a choice.

Danica Brown was one of these unwilling customers for Numi Financial, a company that issues hundreds of thousands of debit cards each year to people leaving incarceration. Ms. Brown’s period of incarceration was quite brief; she was arrested on the evening of November 24, 2014 in Portland, Oregon while protesting the non-indictment of police officer Darren Wilson over the death of black teenager Michael Brown. She had around $30 in cash with her when she was arrested. When she was released from the Multnomah County Jail later that same night, she did not get her cash back; instead, she was given a Numi debit card and a couple pieces of paper explaining how to use it. Ms. Brown learned from these materials that the card carried a “monthly maintenance fee,” and she assumed this meant the fee would be charged after a month of use. She was wrong.

Numi charged its first maintenance fee of $5.95 after Ms. Brown had the card for just five days. A few days later, when she tried to make a purchase for which she had insufficient funds on the card, Numi charged another $0.95 declined transaction fee. In all, Numi took out over 20% of the card’s $30 value in fees. Ms. Brown’s experience was typical. A study of Numi cards issued in Oregon and California found that 80% of recipients incurred fees,and around one-third of Numi’s cards are never used at all (such as by people who are “released” from immigration detention through deportation to another country where Numi’s cards do not work). If a card is not used, the entire balance reverts to Numi through maintenance fees.

Ms. Brown filed suit against Numi and its partner, Central National Bank, which hosted the account where Ms. Brown’s money was held once she left Multnomah County’s custody. She sought to represent a class of all people released from jails or prisons nationwide who received their money back on a Numi card and were charged fees. She argued that the release debit card system violates the Electronic Funds Transfer Act, a law protecting consumers from unreasonable fees on prepaid cards. Among other things, the EFTA makes it illegal to charge a service or maintenance fee on a prepaid card until the consumer has had the card for at least a year. Ms. Brown’s lawsuit also argued that Numi’s cards violate the U.S. Constitution, specifically the takings clause of the Fifth Amendment, which says the government cannot take a person’s property without providing them just compensation.

The trial court in Oregon dismissed Ms. Brown’s lawsuit in its entirety. It ruled that release cards fall into an exemption from EFTA for prepaid cards that are not “marketed to the general public.” Because only former prisoners receive these cards, the court concluded, they are not protected by EFTA. As for the constitutional claim, the court said nothing had been taken from Ms. Brown because the card was the “functional equivalent” of the cash it replaced.

Public Justice joined with the Human Rights Defense Center, who had represented Ms. Brown since the case’s inception, to pursue an appeal to the U.S. Court of Appeals for the Ninth Circuit. We filed a brief explaining why the lower court had gotten both the law and the facts wrong. We were also supported by a coalition of legal aid and public defender organizations with an amicus brief explaining how poverty, low financial literacy and other challenges facing people returning from incarceration make the fees on Numi’s release cards particularly burdensome for that population, and particularly hard for them to avoid.

On March 16, 2020, the Ninth Circuit issued a unanimous opinion reversing the district court on all counts and reinstating Ms. Brown’s suit. The appeals court ruled that people being released from incarceration are rejoining the general public, and as such, fall within EFTA’s protections. It also noted that Numi’s cards are not the functional equivalent of cash or a check because their value deteriorates “quickly and permanently.” Finally, the Ninth Circuit opinion commented on the need for legal safeguards when private actors like Numi, with their profit motives, insert themselves into the legal system:

“There can be little doubt that Multnomah County’s release card program with Numi has changed the simple government function of returning confiscated money to a released inmate into a venture in which the released inmate’s money can be eroded or lost by the charge of profit-oriented fees. Numi is entitled to fair compensation for its services, but that does not mean that it should be able without restriction to provide cards to released inmates who have not asked for them and who are likely to end up with less money than was taken from them. Similarly, the government of Multnomah County should not so easily be able to shift the burden of securing and returning released inmates’ funds to the released inmates themselves, many of whom, like Brown, are never charged with a crime.”

This is the first time an appellate court has weighed in on the legality of the release card system. Hopefully, the Ninth Circuit’s opinion will serve as a wake-up call for other players in the multi-billion-dollar industry ostensibly offering services to prisoners and their families while actually using them to make money. For years, these companies have been taking advantage of the relative powerlessness of the population they exploit. But a federal appeals court has now said in no uncertain terms that they cannot operate outside the law “without restriction,” and that people like Danica Brown do not lose their rights as consumers, just because they’ve been arrested. This is welcome news to the millions of Americans who come in or out of jail each year, and to the often poor and struggling families who try their best to support them.