Hot Enough for You? The Scary Link Between Factory Farms and Global Warming 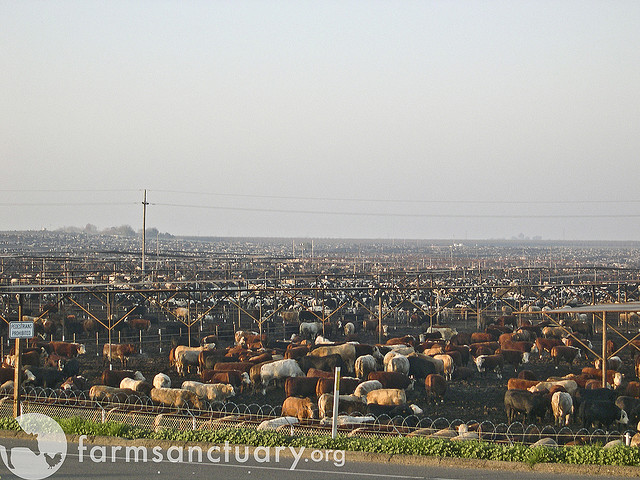 Hot Enough for You? The Scary Link Between Factory Farms and Global Warming

You’ve been hearing a lot from me lately about all the problems caused by the rampant overuse of antibiotics in the industrial animal industry. What I haven’t talked about yet is another equally scary problem that has been linked to factory farms: global warming. Fasten your seatbelts, because this is one bumpy ride.

As you probably already know unless you’ve been living under a rock for the last 20 years, “global warming” refers to the continuing rise in average temperature of Earth’s climate system caused by the buildup of heat-trapping gases in the  atmosphere: specifically, carbon dioxide, methane, and nitrous oxide. The important thing to know about these gases is that the vast majority are produced by human activities – in particular, our toxic, chemical-dependent industrialized agriculture system, which the Center for Food Safety just reported is responsible for one-half of all global greenhouse gas emissions.

Yes, you read that right: one-half, which is way more than any other single causative factor underlying global warming.

Where are all these emissions coming from? According to CFS’s report, agriculture’s overall greenhouse gas emissions are generally recognized to comprise 11-15% of global emissions. But this figure only accounts for the emissions from chemical fertilizers (which are made from natural gas) and pesticides (made from petroleum). Not included in this figure are all the gases emitted by industrialized food production, processing, packaging, and transportation.

One of the most important contributors to this toxic soup are factory farms, also known as concentrated animal feeding operations. Throughout the globe, billions of animals are being raised on factory farms, and those billions of animals produce billions of pounds of manure. In the past, manure from grazing livestock has been used to enhance soil fertility. But modern CAFOs, which cram thousands of animals together into relatively small spaces in order maximize profits, generate way more manure than they can possibly use as fertilizer. The bulk of that leftover manure ends up dumped into so-called “lagoons” (not of the blue kind), where it releases methane, a toxic greenhouse gas 20 times more potent than carbon dioxide.

That’s only half of the story. The other problem is what is being used to feed all those animals. Currently 35 percent of global grain production, including corn and soy, is used for animal feed, which is grown using nitrogen fertilizers. As CFS reports, over half of these fertilizers are lost through groundwater leaching or released as nitrous oxide into the atmosphere – and nitrous oxide is 310 times more potent than carbon dioxide. CFS estimates that, in the United States alone, a full 69 percent of nitrous oxide emissions comes from agriculture.

But wait, there’s more! The proliferation of genetically engineered crops is also a powerful contributor to global warming. A lot of GE crops are designed to withstand direct application of herbicides, so that the surrounding weeds can be killed off without affecting the crop. This handy feature, however, has caused a 527 million-pound increase in herbicide use in the United States from 1996 to 2011.

Meanwhile, the U.S. government has done little to solve the problem. Congress has thus far failed to pass any federal climate legislation, and America’s industrial food production system is one of the least regulated industries in this country.

The upshot is that global warming is on the rise, with literally no relief in sight. Why should you care? Lots of reasons, not the least of which is our global food supply. The biggest observable impact of global warming is extreme weather of all kinds, including intensive and prolonged droughts (California, anyone?), widespread flooding, brutal winters, blistering summers, enormous hurricanes and nearly unstoppable wildfires.

All these events are a reflection of the increasing instability of the global climate, which—ironically—is also exerting a profound negative impact on our ability to grow food. In the end, the way we grow food in America could destroy our very ability to feed ourselves.

Is there anything you can do to help?  Aside from lobbying your representatives to pass meaningful climate legislation , the key is to reduce our dependence on industrialized agriculture. How?

First, buy organic. I know, it’s expensive. But according to CFS, organic agriculture uses 30 to 50 percent less energy than comparable industrial systems. Not only is organic food healthier for you, it’s healthier for the environment.

Second, avoid GE crops, which are controversial for all sorts of reasons, not the least of which is their dramatic dependence on noxious herbicides that end up in the atmosphere.

Third, and perhaps most importantly, keep away from factory-farmed meat and dairy. If you want to eat eggs, drink milk, or grill a steak, make sure that you are buying locally and sustainably. Not only will you be avoiding all the antibiotics, growth hormones and other crap that’s being pumped into our factory-farmed animals, but you will be doing what you can to help save our planet.