Skip to navigation Skip to content
Don’t Trust the Chamber of Commerce When it Tells You That Arbitration is Good for Consumers | Public Justice
8331
post-template-default,single,single-post,postid-8331,single-format-standard,tribe-no-js,page-template-public-justice,ajax_updown_fade,page_not_loaded,,select-child-theme-ver-,select-theme-ver-4.6,menu-animation-underline,popup-menu-fade,side_area_over_content,wpb-js-composer js-comp-ver-6.10.0,vc_responsive,elementor-default,elementor-kit-34575 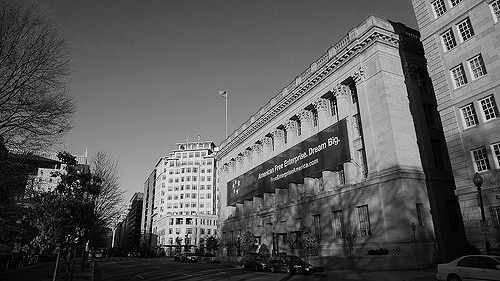 The U.S. Chamber of Commerce, one of the country’s largest corporate lobbying organizations, wants American consumers to believe that it has their best interests at heart. This is a myth.

In a recent blog post, the Chamber argues against a proposed rule being considered by the Consumer Financial Protection Bureau. The rule would prohibit contracts for consumer financial products from combining arbitration clauses that prevent consumers from going to court with terms that ban consumers from bringing or being a part of a  class action. The Chamber argues that when consumers have been cheated by banks or debt collectors, it’s in the consumers’ best interest to bring those companies to individual arbitration, rather than banding together in a class action. This position, however, is completely disingenuous.

Arbitration is an alternative dispute resolution mechanism that mirrors traditional courts, but is less formal, and allows for only extremely limited judicial review. Agreements to take disputes to arbitration, rather than to court, have been a common feature of business-to-business contracts and collective bargaining agreements for decades. For parties with similar bargaining power, this arrangement can be faster and less expensive than a court trial.

Forced arbitration is news for consumers. As the New York Times has recently reported in a fantastic investigative series, many companies now include mandatory arbitration clauses in the purchase and service contracts that they sign with customers. People are signing away their rights to go to court because of a block of fine print buried in the long form contracts necessary to access many basic goods and services like credit cards, cell phones, cars, computers, and online purchases. Indeed, the move to e-commerce has, in many ways, increased the problem, as form contracts themselves are often hidden behind a web of easy-to-miss hyperlinks on companies’ websites.

For corporations who break the law, the spread of forced arbitration has been a boon. Arbitration is confidential, so no embarrassing public allegations of fraud or of faulty products. It’s also a private service, not a public one, which means the parties pay the arbitrator for her time. This is often spun as a good thing for consumers because companies may agree to pay most of these costs (though they don’t always). But arbitrators are professional private judges working for for-profit companies. When their employer has a contract with a major corporation, they can expect to see that “client” many times. Since the parties choose the arbitrators who will hear their dispute, this can incentivize the arbitrators to prefer the repeat players who are most likely to supply future business.

But the biggest problem has been the combination of arbitration clauses with clauses banning class actions, a move the U.S. Supreme Court—in a pair of sharply divided 5-4 decisions written by the late Justice Scalia—has permitted. Most deceptive practices don’t cheat the average consumer of huge sums, but rather take small amounts of money. Who is willing to spend the time and effort to arbitrate to get back $50 that they shouldn’t have been charged? $100? Even $1000? And what lawyer can afford to keep a practice open taking on such small value claims? The answers, overwhelmingly, are no one, and no lawyer, meaning that a company can cheat a million people just a little bit, and expect to avoid any liability because the consumers can’t band together to present their claims collectively as a class.

The CFPB, following direction from Congress, carefully examined the impact of mandatory individual arbitration in consumer financial contracts and concluded, after an empirical study of unprecedented scope and thoroughness, that the ability to bring  class actions in appropriate cases has been extraordinarily beneficial to consumers, and those benefits have been lost for consumers whose only option has been individual arbitration. As Public Justice has argued for years, mandatory, individual arbitration is bad for consumers, borrowers, and employees, and we have applauded the CFPB’s proposal in several forums. The Chamber, and other business lobbyists, have argued vociferously against it.

In its recent blog post (and the accompanying white paper), the Chamber presents arguments against the CFPB’s proposal as though arbitration were a good thing for consumers. For detailed discussion of why class litigation is better for consumers than individual arbitration, take a look at the CFPB’s explanation and support for its proposed rule, or one of Public Justice’s many posts on the importance of class actions and the dangers of arbitration.

But the Chamber’s recent blog also presents an opportunity to consider a few other reasons to be suspicious of its position. First, can it really be that an organization that consistently lobbies against any legal accountability for corporations, even if they lie to, cheat, and abuse American consumers is actually looking out for those consumers’ best interests? No. The Chamber is hiding the interests of its corporate clients behind a smokescreen of concern for consumer well-being.

Second, if individual arbitrations are really so much better for wronged consumers than class actions, then there should be no need to force them into it, right? The Chamber of Commerce regularly advocates for free markets and laissez-faire policies. Why doesn’t it trust that the best option for consumers will rise to the top in the marketplace of ideas?

The Chamber’s blog post itself answers this conundrum when it moans that permitting consumers to use class actions “will have the practical effect of eliminating arbitration altogether.” The Chamber is admitting that it knows that individual arbitration isn’t actually good for consumers, and that consumers don’t use it and won’t use it. Its position has absolutely nothing to do with helping people, it’s about taking away consumers’ ability to pursue class actions, which in many cases is the most effective tool (and often the only effective tool) to vindicate their rights.

Finally, the Chamber’s post argues that private litigation is not necessary because of “the significant role of government enforcement.” This seems to argue that the CFPB shouldn’t create rules or regulations that make it easier for private individuals to police corporate behavior. Instead, the Bureau and other government agencies should bring enforcement actions themselves.  The problem with the Chamber’s argument that individuals don’t need rights to go to court, because the government will solve their problems, is that the Chamber is ALSO simultaneously seeking to gut the government agency it’s talking about.

The author of the Chamber’s blog post is Travis Norton, the Executive Director of the Center for Capital Markets. The Center lists the CFPB as an “issue” that it works on as part of its efforts to secure access to credit for American businesses. To that end, it prominently states that one of its top “Priorities” in regard to the Bureau is to “urge [it] to prioritize the use of rules and regulations over the use of … enforcement actions.” So the Chamber’s position is to discourage both private and public enforcement. Again, it is not trying to create a level playing field for consumers; it is trying to obstruct all avenues for holding corporations accountable for unfair practices.

Public Justice and consumer and civil rights advocates around the country have argued for years that consumers and workers should have a fair day in court when they are duped or abused by law breaking corporations. Sadly, the Chamber and its allies have largely thwarted this right by winning pro-business decisions in the Supreme Court. The CFPB’s proposal is only a partial solution to this problem, but it is absolutely a step in the right direction. The Chamber of Commerce’s argument that arbitration is better for consumers is a wolf in sheep’s clothing. Not only is it empirically wrong, it is not to be trusted.