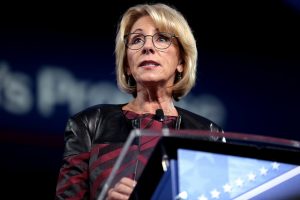 “The Department of Education’s interim guidance shows that the Trump Administration is more interested in protecting the small group of students who claim they were falsely accused of sexual assault than the thousands of students sexually assaulted each year. If the Department truly cared about students’ civil rights, it would not rescind the 2011 guidance, it would enforce it. The 2011 guidance rescinded today was requested by schools and was working well when implemented correctly. It required schools to treat all parties in a campus sexual assault investigation fairly. The new interim guidance instead favors the rights of accused students. This is a dangerous step backwards that will have very real, and serious, consequences for the students Secretary DeVos and her agency are charged to protect.”

Stay tuned for more information regarding Public Justice’s ongoing work on behalf of sexual assault survivors, and our analysis of, and response to, DeVos’s announcement.