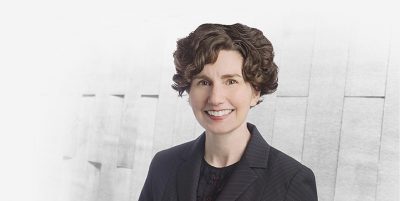 Victoria Nugent has handled an eclectic mix of consumer protection cases since the time she took her first job out of law school at a place then known as Trial Lawyers for Public Justice. She’s proud of her work on all of these cases, but she says the ones that affect her most are those that involve clients who have lost their homes.

“A home is more than just physical shelter for people—it’s a haven, and it’s where their community is,” Nugent said. “To lose that because of somebody else’s callousness or greed is really terrible.”

Now co-chair of the Cohen Milstein’s Public Client practice group, which works with state attorneys general to address consumer fraud, she’s been on the front lines of litigating home loss cases—working extensively on mortgage fraud and deceptive loan servicing lawsuits.  A decade earlier, she litigated against insurance companies that refused to fully pay claims to home-owners who lost their houses in a flood along the Chesapeake Bay.

But Nugent didn’t always know she wanted to be a lawyer. At the non-profit advocacy group Public Citizen, where she worked for seven years after graduating college, she began to notice that the people making the most impact had something in common: they were all attorneys.

“What I saw was that they all had this degree and specialized training in critical thinking and writing that gave them this tremendous flexibility,” Nugent said of working with lawyers at Public Citizen. “It allowed them to go into lots of kinds of jobs, whether it was researching, organizing, lobbying, or actually litigating.”

Nugent credits her time at Public Citizen and Public Justice with sparking her desire to use the law to fight for consumers. She says she sees her experience at Cohen Milstein as an extension of the same work she had been doing in the past.

In one instance, this was literally the case. One of the largest lawsuits Nugent worked on at Public Justice was a consumer dispute in which a forced arbitration clause prevented a man living in a defective mobile home from suing the manufacturer. The case dragged on for so long that, despite having taken a new job at Cohen Milstein, Nugent continued to work on the case alongside Public Justice’s Paul Bland.

Since that case, which she calls “incredibly, personally meaningful,” Nugent has scored a number of important victories on behalf of consumers. She’s especially proud of cases against companies using a deceptive internet sales practice called “post-transaction marketing”—in essence, companies would weave subscription services into the checkout process on their website, so that when a consumer bought a product, he/she would also inadvertently sign up to be periodically charged for a subscription.

Nugent and her Cohen Milstein team filed suits in California and Washington, and courts in both states declared that the practice was deceptive. After the cases were filed, Congress passed legislation that actually banned the practice. The victories were especially important, Nugent says, because they represented a new frontier in consumer deception law.

“The cases involved the application of general consumer protection laws to new media in a way that hadn’t yet been done,” Nugent said. “It was an exciting victory because it was intellectually challenging and new.”

Outside of her work, Nugent enjoys entertaining and cooking for friends and family and  running a style blog with an assist from her husband, who doubles as her photographer.  Although no longer a Public Justice employee, she continues to serve the community and greater good as a member of the Cohen Milstein where she got her start as an attorney.