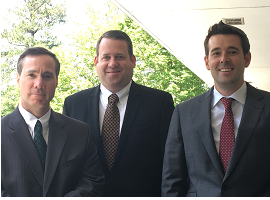 If there’s one word managing partner Adam Webb of Atlanta’s Webb, Klase & Lemond would use to describe his firm, it’s “creative”. His firm doesn’t cut and paste solutions. Instead, they fight against abuses of power on multiple fronts in original ways in order to give everyday citizens and consumers the protection they deserve from government and corporate abuses.

Sign ordinances are nearly ubiquitous – they exist to help promote traffic safety and aesthetics, maintain property values, and avoid unnecessary clutter. In 1999, Fayette County, Georgia, adopted an ordinance that restricted the size and number of non-commercial signs a person could put in their yard to one sign of no more than six square feet.

Curtis Coffey, a resident of Fayette County, found these restrictions to be unfair – elections tend have multiple candidates running in multiple races, and the ordinances made it impossible for Coffey to put multiple signs in his yard without being issued citations for a violation. So in July 2004, he asked for the assistance of Webb, Klase & Lemond, specialists in free speech signage cases, to fight against these First Amendment limitations.

The case made its way to the Georgia Supreme Court twice, where the justices unanimously found that the restrictions in Fayette County were unconstitutional. If the county wanted to promote traffic safety, it must use the least restrictive means possible while carrying the burden of proving its restrictions are needed. Webb views the decisions as “groundbreaking,” as they have been applied to other speech limitations beyond sign ordinances.

“It all depends on what type of society you want to live in,” says Webb. He compares the example of a city with the one-sign restriction to a city where residents can support multiple candidates in several races. “That’s something we believe should be embraced and encouraged, not squashed,” Webb says

Beyond First Amendment litigation, the attorneys at Webb, Klase & Lemond also fight against corporate injustices through class action suits. Of the $30-40 billion in overdraft fees charged by banks each year, a substantial amount result only because of banks’ improper transaction practices. For the wealthy, an overdraft fee is something they rarely face and nothing more than an inconvenience if they do. But for the poorest members of society – the ones who are most likely to be charged – it can mean serious financial trouble. One fee can begin a spiral of fees that quickly swallows an entire paycheck.

Starting in 2007, Webb, Klase & Lemond began filing class action suits against predatory banks. By basing their argument in part on breaches of the covenant of good faith and fair dealing, the firm was able to overcome the banks’ self-serving contracts. They teamed with other firms in MDL 2036 (In re Checking Account Overdraft Litigation) and have so far been able to recover over $1 billion dollars for class members, which has been returned to customers automatically, with no claims process.

Webb thinks that a lot of the firm’s success in arguing cases for consumers and citizens alike comes from the firm’s innovation:  they work tirelessly to figure out a case from new angles, which allows them to find innovative legal grounds for proceedings. Using these strategies, Webb, Klase & Lemond have helped secure hundreds of millions of dollars for people who have been victimized by abuses of power.

If there’s one common misconception about their consumer work they wish they could clear up, it’s the idea that trial lawyers are only in it for the money, especially when it comes to class actions. “[We’re] willing to go out and spend an enormous amount of time and money, wage battles that sometimes last a year, several years, or even a decade to obtain recovery,” Webb says. That’s dedication to their cause.