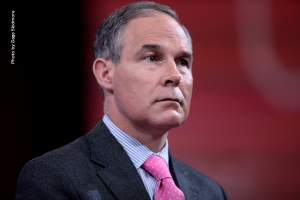 For the first time in our 35-year history, Public Justice is opposing a cabinet-level nomination. And we need you to join us.

Please call your Senators and ask them to vote ‘no’ on the nomination of Scott Pruitt to lead the Environmental Protection Agency.

Here are just a few of the reasons Pruitt is the wrong choice to lead the EPA:

It’s difficult to imagine a more unqualified person to lead the nation’s environmental protection efforts. Threats to our climate are real, but any assertion that Scott Pruitt will deal with them responsibly is pure fiction. He cannot be trusted to guard our environment, or put public interests ahead of the oil lobby.

Join us in opposing Scott Pruitt, and tell your Senators to reject his nomination and demand a more qualified nominee to lead the EPA.

Together, we can push back against the Trump Administration’s assault on the environment.