The Federal Government Is Poised to Give Payday Lenders New Legitimacy. That’s Bad News for Consumers.

The Federal Government Is Poised to Give Payday Lenders New Legitimacy. That’s Bad News for Consumers. 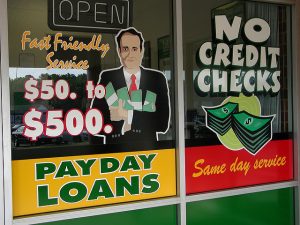 The Office of the Comptroller of the Currency (OCC) – the primary federal regulator of national banks – seems poised to take action on an issue that would be potentially devastating for consumer protection efforts and, in particular, efforts to take on payday and other forms of predatory lending.

Broadly speaking, whenever consumers use technology for banking – such as computer programs, mobile apps and internet-based payment systems – they are using something known as “fintech.” Paying a credit card bill online or using a bank’s mobile app to deposit a check, are two examples of fintech. But now, the OCC appears ready to wrap companies that are not traditional banks – the Silicon Valley start-ups of the financial services world – under the umbrella of fintech. And that’s bad news.

Under the National Bank Act, the OCC has authority to issue national charters to institutions that hold your money, as well as other special-purpose charters that Congress allows, such as those for credit card banks. The OCC evaluates whether to grant national charters, then issues regulations governing how those bank operate and can oversee those banks to make sure they are complying with those regulations. Banks with national charters do not need state-by-state permission to operate and – this is key – they do not have to follow many state laws, including interest-rate caps, licensing and operating requirements, and other consumer protection statutes. On the other hand, financial institutions without a national charter – like payday lenders – are fully subject to state laws and regulations.

Which brings us to fintech.

In September 2016, the OCC announced that it was considering whether to create a fintech national charter. If that becomes reality, payday lenders with astronomical interest rates could be rolled out nationally, with little consumer protection oversight. For example, LendUp has been hailed as the quintessential fintech company. In truth, it is a predatory lender that exists only online and provides loans with interest rates ranging from 29% to 918% for California residents. Currently, LendUp can only operate in states where it is licensed and can only offer products that comply with state law. So in most states, LendUp currently cannot operate at all. But if the OCC grants it a fintech charter, LendUp would be able to offer its full range of exorbitantly priced products nationwide, regardless of whether voters or legislators have banned payday lenders in their state.

But it doesn’t stop with LendUp, either. The fear is that a national charter may pull companies that are now operating outside the law – and therefore subject to consumer protection enforcement – into the realm of legally legitimate businesses. Take, for example, Western Sky. Their business model involved offering high-priced consumer loans (I represented clients with loans subject to a 232% interest rate) nationwide over the phone and web. The true lender – CashCall, a California company – essentially laundered its loans through an American Indian tribe in South Dakota to claim those loans were subject only to the laws of the tribe, and not state or federal laws.

That scheme was largely taken down by lawsuits showing the loans unquestionably violated state interest rate caps, and that CashCall was operating without required state licenses. But if, instead, CashCall decided to incorporate a company in South Dakota (which has no interest rate cap), offer the same products nationwide online and obtain – via a big gift from the OCC – a national fintech charter, that previously illegal business model would then be completely legal in all 50 states and DC.

And that, in short, is why the OCC’s proposal is so alarming and dangerous. OCC control of banking institutions hasn’t, in the recent past, led to any increase in consumer protection. In fact, the opposite has been true. To cite just one example, the OCC stymied states’ attempts to limit the subprime mortgage lending that led to the housing crisis. Consumers are far better served by letting the states decide which business practices are good for consumers, and which aren’t.

The Trump Administration has tapped Keith Noreika to serve as Acting Comptroller until a new, permanent Comptroller is appointed and confirmed. As Noreika begins to review the policies and programs of the OCC, he should put the fintech charter on the chopping block. Too many consumers – many of them among the most vulnerable to payday lending practices – face entrapment in endless cycles of debt if the OCC allows this proposal to go forward. The fintech charter must be stopped.