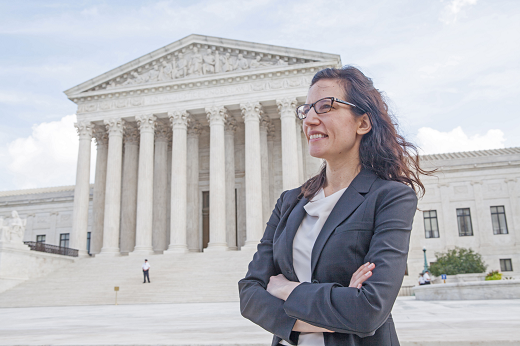 On Tuesday, Public Justice—along with its wonderful co-counsel, Andrew Schmidt Law and Fair Work Law—won a major victory for workers in the U.S. Supreme Court! The Court issued a unanimous decision for our client in Oliveira v. New Prime, a case about whether transportation companies, when sued by their workers for things like wage theft or sexual harassment, can force those workers out of court based on a federal statute called the Federal Arbitration Act. In an 8-0 opinion written by Justice Gorsuch, the Court definitively held they cannot. All transportation workers, the Court held—independent contractors and employees alike—are exempt from the Federal Arbitration Act.  And so transportation companies can’t use that Act to force their workers out of court and into arbitration. This is a huge win for transportation workers and a rare blow to forced arbitration, which in recent years has seemed to be a near-impenetrable shield for big corporations acting badly.

This is a particularly big deal for truck drivers like our client, Dominic Oliveira. We often hear from advocates that wage theft and sexual harassment are rampant in the trucking industry—an industry that employs millions. But for years, many trucking companies have been using forced arbitration as a shield against efforts to hold them accountable. In many cases, that will no longer be possible. A huge number of the claims the industry was trying to force into arbitration will now be heard in court, meaning lots of companies that were previously able to get away with egregious wage theft and harassment will finally be forced to clean up their act.

In this case, Dominic Oliveira alleged that New Prime, Inc., a large national trucking company, misclassified its drivers as independent contractors and failed to pay them minimum wage. In fact, not only was Dominic underpaid, his paycheck was sometimes negative because Prime would deduct its business expenses—things like fuel, truck payments, and insurance—from Dominic’s paycheck.  In March 2015, Dominic filed a lawsuit against Prime on behalf of himself and thousands of current and former Prime drivers who have been misclassified as independent contractors and underpaid just like him. But Prime tried to kick Dominic (and all the other drivers whose wages he’s fighting for) out of court, arguing that the Federal Arbitration Act required the court to enforce the company’s arbitration clause—a provision Prime and many other companies put in their employment contracts that says that workers can’t band together to bring claims in court, but instead have to fight the company one-on-one in private arbitration.

However, by its terms, the Federal Arbitration Act does not apply to the “contracts of employment” of transportation workers engaged in interstate commerce. Prime tried to get around this statutory language by claiming that because it labels its drivers independent contractors, their contracts aren’t “contracts of employment.” Their argument was defeated in the First Circuit Court of Appeals, which agreed with Public Justice that the history of the Federal Arbiration Act and the ordinary meaning of its terms demonstrates that it exempts all transportation workers, regardless of how their company labels them.

And on Tuesday, the Supreme Court agreed! “When Congress enacted the Arbitration Act in 1925,” Justice Gorsuch wrote on behalf of the Court, “the term ‘contracts of employment’ referred to agreements to perform work”—all agreements to perform work. “No less than those who came before him,” the Court held, “Mr. Oliveira is entitled to the benefit of that same understanding today. Accordingly, his agreement with New Prime falls within [the Federal Arbitration Act’s] exception” for transportation workers. This decision clears the way for Dominic and perhaps hundreds of thousands of other transportation workers like him to go to court if their employer breaks the law.

“We are so proud that Dominic Oliveira’s long fight to have his claims heard in a court of law has been vindicated by the Supreme Court’s decision today,” Jennifer Bennett, who argued the case, said in a statement. “Today’s ruling is a huge step forward for truck drivers. This decision will enable so many drivers like Dominic, who are not being paid what the law requires, to go to court and fight for their rights.”

Reaching this point was a team effort. Andy Schmidt of Andrew Schmidt Law and Hillary Schwab of Fair Work Law filed the case initially, and continued to litigate it with Public Justice all the way up to the Supreme Court. There were several phenomenal amicus briefs filed in support of our client when the case reached the Supreme Court. And, of course, our client Dominic Oliveira, has been fighting for years to have his claims heard.