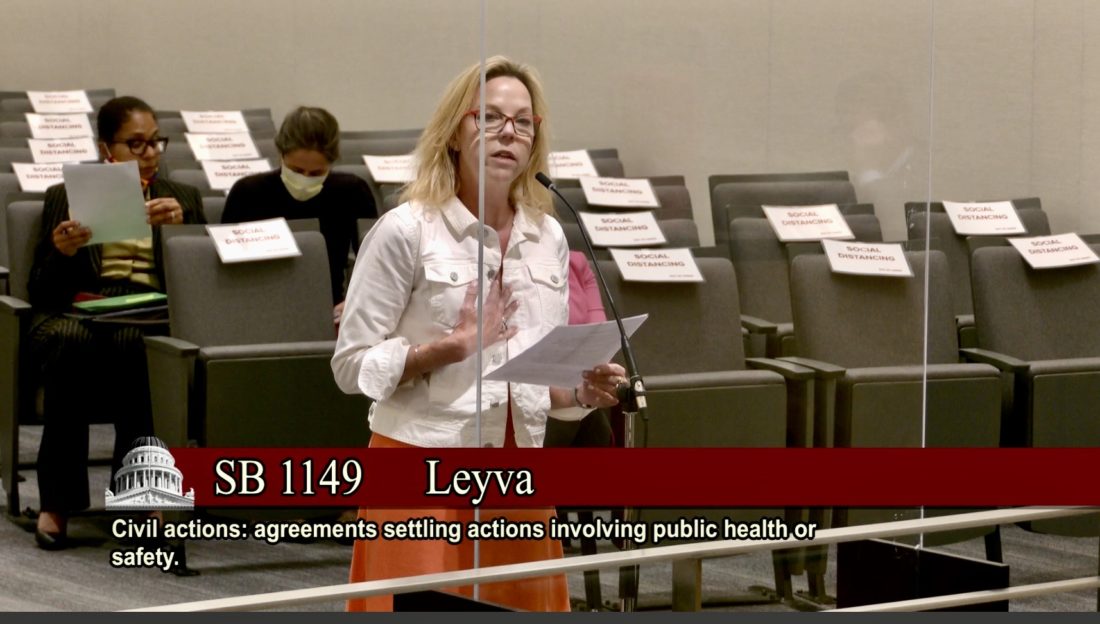 (Pictured above: Amy Cooper testifies before the California Senate Judiciary Committee on 4/5/22 about the preventable OxyContin overdose death of her son)

On Tuesday afternoon, California’s Senate Judiciary Committee voted to advance SB 1149, the ‘Public Right to Know Act,’ a bill introduced by California Senator Connie M. Leyva to end common court secrecy practices that hide critical, and often life-saving, information from the public eye. If passed by the state legislature and signed by Governor Gavin Newsom, California would join other states with similar anti-secrecy laws on the books, including Florida, Louisiana, Montana, South Carolina, and Washington.

Among those testifying in support of the legislation, co-sponsored by Public Justice and Consumer Reports, was California mother Amy Cooper, who became a citizen activist after the preventable opioid overdose death of her son, John Gotley, in 2014.

“John was my first-born son,” Cooper said, clutching papers imprinted with her testimony. “He had a huge heart and family was the center of his life. He loved his brothers and his sister immensely, I want you to know him because he is more than a statistic and there’s a lot of him out there now.”

John graduated from Thomas Moore college with a degree in philosophy and rhetoric and became the founder and CEO of a startup company.

“From our perspective, he was living his best life,” said Cooper. “He had an apartment. He had a puppy. He had a girlfriend. He was living what we all think of the Silicon Valley dream,” with plans to go to law school.

Unbeknownst to Cooper, however, her son took Oxycodone throughout college after a motorcycle incident, getting the addictive pain medication from various doctors in various states and innocently following their usage directions.

“We believe that’s what triggered his fall into addiction,” she testified. But since he showed no evidence of “substance misuse,” the family was “in complete shock” when San Jose police called to say his girlfriend found him unresponsive sitting outside on his patio. That was on July 7th, 2014. It took five months before they learned that John had been prescribed 56 pills of Oxycodone on July 1st.

“I’m just here to tell you that when a child dies, it is unimaginable,” Cooper said. “But when their death is preventable, it is tragic beyond words. And I hope with education and prevention, senseless deaths like my son’s will stop.” 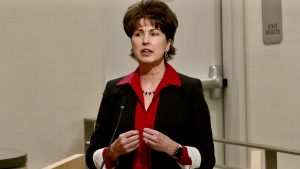 Cooper’s story highlights the need for SB 1149, Leyva told her colleagues. “In the case of Purdue Pharma, the company told outright lies for many years regarding safe dosage levels and the likelihood of addiction from OxyContin, which ultimately killed hundreds of thousands of people. These tragedies that touch far too many families across California and the nation – was largely enabled through courthouse secrecy and the very tactics that this bill seeks to address.”

Leyva also cited the case of the 2015 balcony collapse at a birthday party in Berkeley. Partygoers and state regulators did not know that “the construction company who built the complex had paid over $26 million in settlements in early defect cases,” but information about those cases remained shielded. Seven people died, including a young woman who initially survived the collapse and testified in 2016 before the legislature about her “life-changing experience.” Tragically, she never recovered from the brain and other injuries and died earlier this year after suffering a severe stroke.

“In an open society, our court records are presumptively open to public inspection,” Leyva said. “Even in a dispute between private parties, a court’s resolution of that dispute is a matter of public interest. This is especially true when a case involves a public danger, such as a defective product or an environmental hazard. The courts repeatedly issue overly- broad protective orders that keep discovery information secret and protect incriminating documents.”

Such secrecy, Leyva said, “is grossly inappropriate when it clearly keeps information about ongoing dangers from the public, which in a very real way can and does threaten their health safety and even their lives.”

Leyva noted that she is taking steps to ensure the bill also addresses concerns raised during the hearing, such as “good doctors” who were lied to about OxyContin. 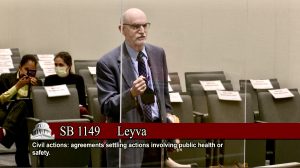 Richard Zitrin, Legal Ethics Professor Emeritus at UC Hastings and author of a new book, detailed the harms caused by court secrecy laws in testifying on behalf of Public Justice.

Zitrin offered a short history of how over-protective court secrecy resulted in a national tragedy unleashed by OxyContin that could have been entirely prevented.

“The state of West Virginia sued the Purdue company in 2002, and in 2004, that case settled and it was settled, apparently for a great deal of money,” Zitrin said. “But the judge involved in that case created a protective order so that none of the truth of the over-prescription and over-addictive properties and the ratcheting up of the dosages came out to the public.”

Later, a federal judge in Cleveland, Ohio, who had 2,000 individual cases in front of him, “created an umbrella protective order, a complete cone of silence,” Zitrin said. “As a result, it was from 2004 to at least 2016 – another 12 years — until information was released to the LA Times.”

Meanwhile, Zitrin said, “the public had no idea whatsoever that the Food and Drug Administration (FDA) was trying to investigate. The FDA was shut out of the process.” Therefore, neither the public nor “innocent doctors” knew or understood that these opioids were being grossly over-prescribed and were grossly addictive. “So, in a real sense […] the doctors were victims, too.”

The bill, Zitrin emphasized, is “about allowing information about dangerous products and environmental hazards to become freely available to the public.”

“We’re talking about the factual information that if only we knew it would save countless lives,” Zitrin said.

Zitrin cited his own examples, dramatically illustrating how car seatbacks, “when they’re hit from the rear, snapback, and people exit and hit the rear windshield and are killed.”

Zitrin also cited known issues with Cooper Tires resulting in 362 deaths documented between 2000-2015 that Cooper’s management said were too expensive to fix.

“Thousands and thousands of cases settled secretly because the information was not known,” Zitrin said.

Individuals and representatives from numerous organizations have expressed support for SB 1149, including civil rights attorney Kipp Mueller and Jason Solomon of Stanford Law School’s Center on the Legal Profession, who also wrote a strong letter in support of the legislation. 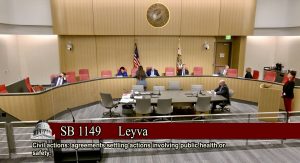 The California Senate Judiciary Committee hearing on SB 1149, the ‘Public Right to Know Act’ on 4/5/22 (Screenshot)

The Public Right to Know Act, Leyva said, “will create a presumption that any court order that conceals information is prohibited unless the court finds that the public interest in disclosure is clearly outweighed by a specific and substantial need for secrecy” adding that it will also “prohibit settlement agreements that restrict the disclosure of information about a defective product or environmental condition that poses a danger to the health and safety.”

It also, she noted, specifically “tailors its application to only information about a danger to public health or safety that is likely to cause significant or substantial bodily injury, or illness or death.”

“This is about knowledge, and it’s about keeping people, consumers, safe,” Leyva said.

If you’re a California resident, please contact your state senator and Governor Gavin Newsom. It’s easy. Just say: “Hi. My name is (your name) and I live in (your locale). I urge you to please vote for SB 1149 by Sen. Leyva when the bill is heard on the Senate floor.” Thank you.