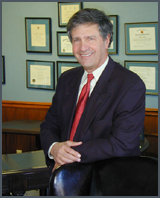 Stan Marks is a big believer that action through the civil justice system echoes far beyond the courtroom. As his career has shown, when victims of crime, government incompetence, and corporate greed take the entity harming them to court, it can change the minds of lawmakers and the public.

“Representing injured people provides you an opportunity not only to do something for them, you can actually change the way corporations and the government behave,” Marks, a member of Public Justice and its Board of Directors, said of being a litigator.

The victory of which he is most proud, and which best illustrates this change, came on behalf of a father whose child was killed after Arizona’s Department of Economic Security (child protective services) failed to investigate repeated beatings by the child’s mother and her boyfriend. The million-dollar verdict in Mammo v. State shined a light on that agency’s wider systemic failure to adequately protect Arizona children.

“Often it’s the type of agency that is criticized for doing too much. But in Arizona, children getting battered and bruised were being put back into homes where the abuse happened, or placed with foster parents who are equally dangerous,” Marks said.

In addition to the verdict, the case spurred Arizona’s President of the Senate to call in Marks to testify about what he discovered about how Child Protective Services was failing. The state legislature then acted to more adequately fund the agency.

“Over twenty years on, it’s still dramatically underfunded. But cases like these have a beneficial effect in compelling the legislature to keep this as more of a priority than they would otherwise treat it,” Marks said.

Marks’s passion for using civil justice to open up avenues for social change extends outside his practice. He currently serves as President of the National Crime Victim Bar Association, a professional association of expert witnesses and attorneys who help victims of crime use the civil justice system effectively.

“We want victims to know that they can have a remedy in the civil system and have a say themselves…when, in the criminal justice system, they’re not the ones bringing the case, the state is,” Marks said of the organization’s work.

Among the challenges Marks is facing in his tenure is assisting the “hundreds of attorneys” in this bar who deal almost exclusively with child abuse and neglect cases, and educating members on the latest developments in campus sexual assault Title IX actions and anti-bullying litigation. Programs on how to adequately represent bullying victims are particularly important now, Marks said, because of how all-encompassing the internet has become in the lives of young people.

Marks is also a longtime activist on public safety issues in Arizona. He co-founded Arizona’s chapter of Mothers Against Drunk Driving in 1980 after being enraged by how many of his clients were being killed at the hands of drunk drivers.

“We changed the law in Arizona,” Marks said. “We now have the strictest laws on drunk driving in the country. I’m proud of that – it lowered the death rate dramatically.”

Marks is now involved in the push to ban texting and driving in Arizona, one of only 12 states that has not passed a ban of any kind.

“I continue to be challenged in this area of law, and appreciate the opportunity I have to help people,” Marks said of his many decades as a trial lawyer. “I would not be happy doing corporate work.”