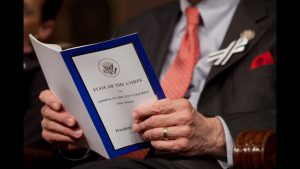 This evening, President Trump will deliver his first State of the Union address before a joint session of Congress. Traditionally, the President’s address has been a forward-looking, aspirational outline for where our country should be headed, and the kind of nation we can be. As we now know, however, this President doesn’t always stick with tradition.

While it’s hard to predict exactly how the President will frame his vision for the next four years, we do have a pretty good idea of what he’ll say. From pledging to make America a manufacturing mecca again to promises of economic prosperity for America’s heartland, President Trump has been nothing if not consistent in the themes he uses and the problems he focuses on.

As advocates for consumers and workers, we hear from people across the country – from West Virginia to Washington State – nearly every day. These are the Americans who understand, and live, the real state of our union, and based on our conversations with them, we have two ideas about what President Trump can do to make it better for everyone.

On at least one point, we agree: The President is right about the real need to help working families in America’s heartland. His prescription for aiding them, though, needs some adjusting.  The truth is that big banks, corporations and predatory lenders are taking advantage of struggling Americans in alarming and unprecedented ways.

Payday lenders, for example, are charging triple-digit interest rates, making it nearly impossible for working families to dig out of debt. It can take years to repay a loan of several hundred dollars that someone takes out to buy medicine or groceries. And the situation for Americans with more traditional bank accounts is almost as bad. Wells Fargo, to use just one example, defrauded countless customers when it opened accounts – and charged fees – that customers never asked for. That’s why America, and the President, needs a watchdog we can all trust to hold the banks and payday lenders accountable.

President Trump should use his State of the Union address to make clear that he intends to keep the Consumer Financial Protection Bureau, and its director Richard Cordray, on the job. No agency or agency head has done more in recent years to protect working class Americans. From barring arbitration clauses (the fine print in contracts that makes it impossible to take a bank or corporation to court) to returning millions of dollars to Wells Fargo customers, the CFPB has done its job, and done it exceptionally well.

The President should also make clear that he will not go along with any plan to wipe away Americans’ access to the courts. A dangerous new bill making its way through the House, for example, would virtually eliminate any possibility for consumers and workers to band together as part of a class action lawsuit. If successful, this draconian bill would make it harder for patients to take on pharmaceutical companies around price fixing and dangerous drugs, as well as making it more difficult for consumers to sue companies with defective products.

The President should put Congress on notice that he will veto any bill that closes the courthouse doors. Citizen Trump has a long history of taking adversaries to court. President Trump should make sure American citizens have that opportunity, too.

Now, make no mistake: We know these proposals aren’t likely in the President’s speech for tonight. But they should be, because there’s another point the President is right about: He won the election because he was able to convince many struggling Americans in the heartland that he could deliver change and results. But if he turns out to support policies that Wall Street executives and other big corporate lobbyists demand that would close the courthouse doors he will find it difficult to win those voters over a second time.

For many families who are struggling, the real state of our union is precarious. President Trump can help turn that around by being the champion he promised them he would be. That starts with understanding that big banks and corporate lobbyists aren’t what will make America great again. But stopping abusive lending practices and standing up to Wall Street will.