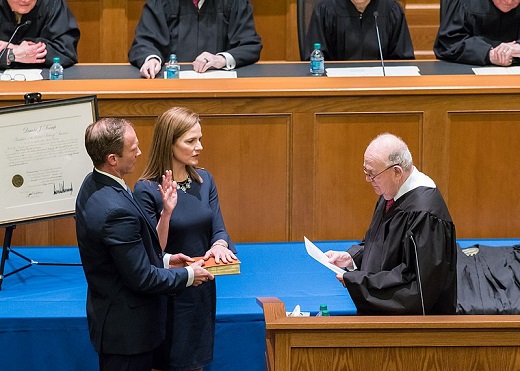 Days after Justice Ginsburg’s death, Judge Amy Coney Barrett visited President Trump at the White House. Their meeting confirmed what many suspected: Judge Barrett, a recently-appointed member of the U.S. Court of Appeals for the Seventh Circuit, is the front-runner for Trump’s nomination to the Supreme Court. As a result, lawyers across the country have turned their attention to Judge Barrett’s short record on the bench. For civil rights advocates, one of her most troubling opinions is Doe v. Purdue University. There, Judge Barrett’s ruling turned a sex discrimination statute on its head, using a law meant to prevent and address sexual assault to promote impunity for that very same behavior.

John Doe, a student at Purdue University, was suspended for a year after the school found him responsible for sexually assaulting a classmate. Doe brought two claims against the school in federal court. First, he says the school’s procedures were so unfair as to violate his constitutional due process rights. That is a traditional claim for a suspended student to make. Second, Doe contends the school was motivated to discipline him because of anti-male bias, and so violated Title IX of the Education Amendments of 1972. Yes, that Title IX – the sex discrimination law that requires schools to protect students from sexual assault and remedy its educational impact.

A district court dismissed Doe’s suit in full. In an opinion written by Judge Barrett, the Seventh Circuit reversed and allowed it to proceed. Her decision on the constitutional due process claim may well have been right. But the opinion’s ruling on the Title IX claim is wrong—and disturbing. On a motion to dismiss, a court must accept a plaintiff’s version of events. Even by Doe’s own account, though, there was no evidence the school had suspended him because of his sex, as required to state a claim under Title IX. Yet Judge Barrett relied on evidence that the school was trying to do right by survivors as evidence that it discriminated against men specifically. That will discourage schools from meaningfully addressing sexual violence, since doing so may—according to Purdue’s funhouse mirror vision of Title IX—justify a suspended student’s suit.

One of the most disturbing parts of Purdue is that it treats the Department of Education’s efforts to enforce survivors’ Title IX rights as evidence of anti-male bias. A few years before Doe was suspended, the Department had sent a letter to schools reminding them of their Title IX responsibilities to victims. And it had opened investigations into Purdue’s Title IX compliance. That, Judge Barrett wrote, “gives [Doe] a story about why Purdue might have been motivated to discriminate against males accused of sexual assault.” In her view, then, a civil rights agency’s efforts to stop discrimination is evidence of unfair bias against (a subset of) people accused of discrimination.

Going forward, that will put civil rights agencies in a bind. Their job, of course, is to combat discrimination. But, by Purdue’s logic, any attempt to do so will instead serve to protect people who discriminate from consequences for their actions—consequences that may be necessary to root out injustice. For example, if the Department of Justice investigates a police department for racially profiling Black residents, that might provide evidence of “discrimination” against white cops fired for racism. Those officers’ suits for reinstatement might succeed as a result. With that risk in mind, DOJ could reasonably determine that any enforcement actions will ultimately undermine their goals.

Another big problem with Purdue is that it conflates “people accused of sexual assault” with “men.” That reasoning doesn’t hold up: People of all genders are victims of sexual assault, and people of all genders commit it. As other appeals courts have recognized, the Department of Education’s letter reminding schools of their duties under Title IX was entirely gender-neutral: It benefited victims of all genders, and it certainly did not encourage schools to punish members of a specific sex. Similarly, a university’s decision to institute robust measures against sexual assault is not evidence of bias against men. Nor is its decision to believe an alleged victim over the alleged assailant, as the school did in Purdue.

None of this is to say that the policies Purdue used to discipline Doe were fair. If his allegations are true, Doe should probably win his argument that the school violated his constitutional due process rights. But that’s very different than discriminating against him because of his sex. Many courts have explained that, even if a plaintiff adequately alleges that a school was biased against people accused of sexual assault and for alleged victims, that is not equivalent to bias against men. Men—like women and people of other genders—can be both victims and perpetrators of sexual violence.

Purdue ignores another settled rule of anti-discrimination law: A plaintiff must establish a “nexus” between any allegations of discrimination and the particular action taken against them. Consider, for example, a plaintiff who believes she was fired by her CEO because of her race. A co-worker’s racist comments the month before will not prove that the CEO’s decision to fire the plaintiff was discriminatory. The plaintiff will need more facts to impute the co-worker’s bias to the CEO and her termination. That rule may be flawed, but it is well established. Yet, again, Judge Barrett imposed a different, more lenient standard for men accused of sexual harassment. By her telling, alleged anti-male bias anywhere on campus is evidence the plaintiff’s punishment was motivated by bias. Purdue relied significantly on an allegation of “discrimination” that had nothing to do with the school’s decision to sanction Doe for sexual assault: an article posted on Facebook by a campus victim-support group that had no disciplinary power. The title was “Alcohol isn’t the cause of campus sexual assault. Men are.” The article itself clarified that “women can be aggressors and men can be targets” but the authors were “focusing here on the vast majority of assaults, in which men are the aggressors and women the targets.”

So, it is doubtful that the article evidenced anti-male bias at all. But even if it did, Judge Barrett’s attempt to connect the victim-support group’s post to Doe’s suspension is nonsensical. She notes only that the director of the group wrote a letter on the victim’s behalf that the investigator gave some weight. There is no suggestion that the director played any role in the school’s decision to suspend Doe other than by serving as an advocate for his alleged victim—a role defined by its partiality. The director’s alleged bias cannot be imputed to the disciplinarians any more than Doe’s lawyers’ biases can be attributed to Judge Barrett.

There is, of course, some irony in Judge Barrett’s conclusion that an article’s (supposed) suggestion that men are responsible for sexual assault is evidence of anti-male bias. After all, her conflation of “people accused of sexual assault” and “men” rests on the mistaken premise that men, and only men, comment sexual violence.

Public Justice’s Students’ Civil Rights Project represents student survivors of sexual harassment and students who face unfair discipline. Too often, a single client is a victim of both forms of mistreatment. We feel strongly that students facing school discipline for any kind of misconduct, including sexual harassment, should be treated fairly. But Purdue’s Title IX ruling advances a different vision of justice in which a school or agency’s respect for victims’ civil rights is evidence of anti-male bias. And Purdue paves the way for courts to apply more lenient standards to discrimination claims brought by men and other dominant groups than courts have regularly applied to discrimination claims by marginalized victims, including women. That much will be true even when schools use fair investigatory procedures. By Judge Barrett’s logic, then, the only way to avoid the appearance of discriminating against men is to ensure their impunity. That is a perversion of Title IX with grave implications for cases where schools conduct proper investigations.

Note: This blog reflects research and writing done in collaboration with Dana Bolger and Sejal Singh. We hope to soon share an article on the larger trend of Title IX suits brought by students accused of sexual harassment.