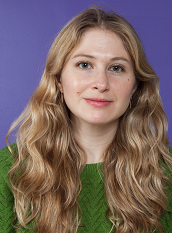 Alexandra Brodsky is the Kazan Budd Staff Attorney at Public Justice. She litigates civil rights cases concerning harassment and other forms of discrimination against students, the criminalization of poverty, and qualified immunity.

Before joining Public Justice, Alexandra clerked for the Honorable Marsha S. Berzon of the U.S. Court of Appeals for the Ninth Circuit and worked to end discriminatory school push out at the National Women’s Law Center, where she was a Skadden Fellow. During and before law school, she served as a senior editor at Feministing.com and founding co-director of Know Your IX, a youth-led organization combatting gender violence in schools. For her work on sexual harassment, she received a Ms. Wonder Award from the Ms. Foundation and was named to POLITICO Magazine’s “50 Thinkers, Doers, and Visionaries” and Forward Magazine’s Forward 50.

Alexandra received her B.A. from Yale College and her J.D. from Yale Law School, where she received the Charles G. Albom Prize for excellence in appellate advocacy and the Reinhardt Fellowship for public interest law.

Alexandra has written for publications including the New York Times, the Washington Post, the Nation, the Atlantic, the American Prospect, and Dissent. She is the author of Against Taking Rape “Seriously”: The Case Against Mandatory Referral Laws for Campus Gender Violence, 53 Harv. C.R.-C.L. L. Rev. 131 (2018), “Rape-Adjacent”: Imagining Legal Responses to Nonconsensual Condom Removal, 32 Colum. J. Gender & L. 183 (2017), and A Rising Tide: Learning about Fair Process from Title IX, 66 J. Legal Educ. 822 (2017).

Alexandra is admitted to practice law in the District of Columbia and New York.