Join Us in Asking Congress to Pass the FAIR Act 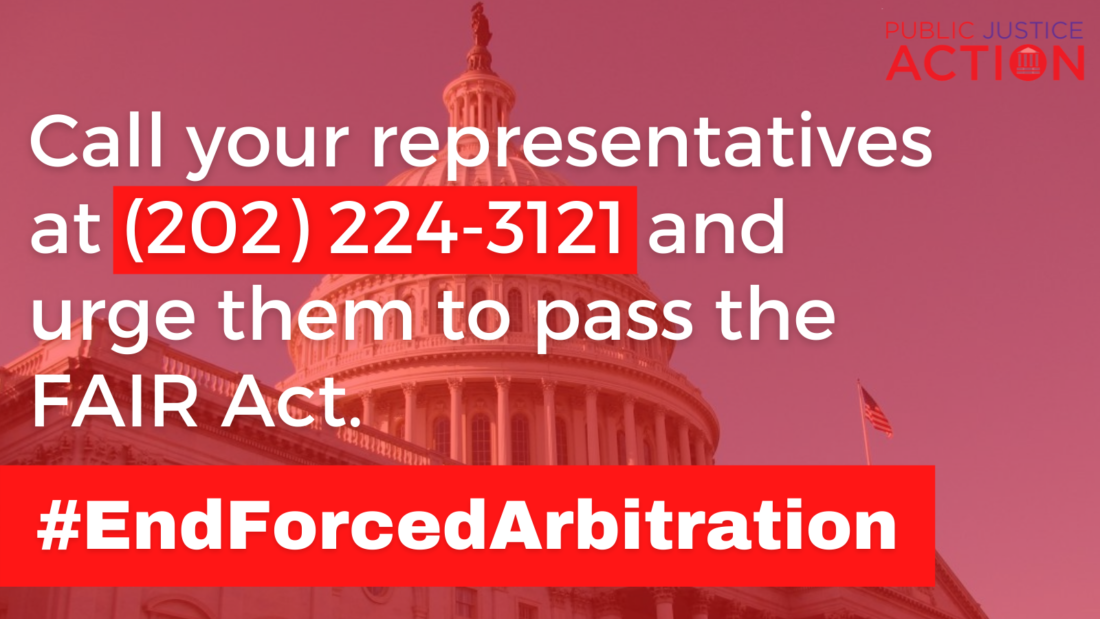 Join Us in Asking Congress to Pass the FAIR Act

Public Justice is proud to support the Forced Arbitration Injustice Repeal (FAIR) Act (H.R. 963), which was reintroduced in February 2021.

In February 2021, a hearing on the FAIR Act was held, entitled “Justice is Restored: Ending Forced Arbitration and Protecting Fundamental Rights.” On Wednesday, November 3, a markup hearing was held on the FAIR Act.

We’ve been working on forced arbitration for a long time, and we know that we can’t wait any longer.

Call on your members of Congress to co-sponsor the legislation and voice their support for a critical bill. Congress must step up and make change on this issue.

Forced arbitration forces consumers, workers, investors, and many more people with claims against a corporation out of court and into a secret, private process overseen not by a judge but by an arbitrator picked by a company picked by the defendant. It has been used to protect companies from a wide variety of complaints, including sexual assault, wage theft, and racial discrimination. And to make matters worse, forced arbitration clauses are everywhere. From cell phone plans to student loans to online “terms and conditions,” they can be found in almost every consumer contract, and can even pose as terms of a purchase, preventing someone from seeking accountability from companies who manufacture faulty or harmful products. For decades, companies have used forced arbitration to evade accountability when wronging consumers and to block access to the courts through private proceedings that keep wrongdoing out of the public eye and ensure companies come out on top every single time. By including forced arbitration clauses in the fine print, companies can prevent plaintiffs from joining together, essentially maintaining power over consumers who would be unable to challenge these powerful corporations on their own.

This method of exploitation and lack of accountability has been made especially evident during the COVID-19 pandemic, in which we have seen how vulnerable people like meatpackers and Amazon workers have relied on joining together and using the justice system to hold companies accountable for creating unsafe working conditions and putting them in harm’s way.

That’s why we’re asking Congress to pass the FAIR Act—and why you should, too.

The FAIR Act would allow cases involving consumer, civil rights, and employment to be heard publicly in a true court of law.  It represents a demand for a fair and just process to handle disputes and ensure everyone can access the courts, rather than being forced to work things out on a corporation’s terms. While it would not fully ban arbitration, the FAIR Act would make these clauses voluntary, giving people an opportunity to choose whether or not they’d like to settle outside of the courts. Without the passage of this Act, corporations will have no incentive to follow the law or act fairly, and they will continue avoiding accountability and exploiting America’s workers and consumers.

The Biden Administration has promised a new era of consumer protection and company regulation. Congress can help move this vision forward by passing the FAIR Act and restoring access to the courts for all and reaffirming the protection of our civil rights.

“We at Public Justice routinely hear from people who are unable to seek justice after a corporation broke the law and harmed them. Forced arbitration clauses bar them from having their claims heard in court,” said Public Justice Executive Director Paul Bland. “The energy in favor of the FAIR Act is like nothing I’ve seen before in this fight for corporate accountability and against perpetrators of gender and race discrimination. Its passage would make American life much safer, healthier, and fairer.”

How can you support passing the FAIR Act? Call your representative and ask them to be a co-sponsor of the FAIR Act if they are not one yet, and thank them if they already are. Now is the time to urge your Members of Congress to pass this important legislation and let them know it’s a phenomenal way to support workers’ and consumers’ right to justice.