Divide and Conquer: Employers’ Attempts to Prohibit Joint Legal Action Will be Tested at Supreme Court

Divide and Conquer: Employers’ Attempts to Prohibit Joint Legal Action Will be Tested at Supreme Court 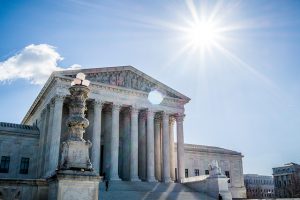 On Monday, October 2, the U.S. Supreme Court will hear arguments in the most consequential labor law cases to come to the Court in a generation, which could fundamentally alter the balance of power between millions of American workers and the people who employ them.

So why are so few people paying attention?

At first glance, the cases may seem dry and complex, as they involve 80-year-old laws that most people have never heard of. But the issue at stake is actually quite simple: should your employer be able to force you to give up your right to join your coworkers in a lawsuit challenging working conditions as a condition of getting or keeping a job?

The federal courts of appeals for the Seventh and Ninth Circuits say the answer should be no. They point to the National Labor Relations Act (NLRA), a law passed by Congress in 1935 to end “industrial strife and unrest” and restore “equality of bargaining power between employers and employees.” The NLRA gives workers the right to join unions and to “engage in other concerted activities” for “mutual aid or protection,” and it makes it illegal for employers to “interfere with, restrain or coerce employees in the exercise” of those rights.

But in recent years, more and more employers are requiring their employees to agree, as a condition of working for that employer, that they must resolve any disputes that might come up in the future in a private arbitration proceeding, and not in court. Many of these so-called arbitration agreements also prohibit the arbitrator from hearing more than one employee’s claim at a time—in other words, they ban employees from taking legal action together, either in court or in arbitration. A recent study from the Economic Policy Institute found that 23.1% of private sector, non-union workers, or 24.7 million Americans, work for employers that impose such a concerted legal action ban.

Sheila Hobson was one such employee. She worked at a gas station in Calera, Alabama that was run by Murphy Oil. When she applied to work there, she had to sign an agreement stating that she would not participate in a class or collective action in court, “in arbitration or in any other forum” and that her claim could not be combined “with any other person or entity’s claim.” Two years later, she joined with three coworkers to file a lawsuit under the Fair Labor Standards Act. She and her coworkers claimed that they were routinely asked to clean the station, stock shelves, check prices at competitors’ stations and perform other tasks while “off the clock” and without pay. Murphy Oil moved to dismiss the lawsuit, pointing to their arbitration agreement and arguing that each employee had to pursue their claims individually.

The National Labor Relations Board, a federal agency created by Congress to enforce the NLRA, stepped in to defend Ms. Hobson and her coworkers. The NLRB ruled that Murphy Oil’s arbitration agreement interfered with its employees’ right to engage in concerted activity for their mutual aid or protection in violation of the NLRA. But the Court of Appeals for the Fifth Circuit agreed with Murphy Oil, leading to this showdown before the Supreme Court.

The crux of Murphy Oil’s position, which is shared by the employers in the cases out of the Seventh and Ninth Circuits that are also being argued on Monday, is that the employers’ bans have to be enforced because of the Federal Arbitration Act. This law, passed back in 1925 at the request of businesses who wanted to be able to resolve commercial disputes privately under specialized rules, says that agreements to arbitrate should be treated the same as any other contracts. And because their concerted action bans are found in arbitration agreements, the employers argue, the FAA requires their enforcement.

But the FAA includes a “saving clause” that allows arbitration agreements to be invalidated on any “grounds as exist at law or in equity for the revocation of any contract.” One such ground for revoking a contract is that it is illegal, and the Seventh and Ninth Circuit opinions pointed out that a contract that interferes with employees’ rights under the NLRA is illegal and thus unenforceable under the FAA’s saving clause. Moreover, as the NLRB explained, the Supreme Court has repeatedly held that the FAA cannot take away anyone’s substantive rights; it merely allows those rights to be pursued in arbitration rather than in court. But the concerted action bans in these cases, and those like them that other employers force employees to sign, do take away the very substantive right to join with coworkers that the NLRA guarantees. By preventing workers from banding together in court or in arbitration, these agreements deprive employees of the ability to pursue their concerted action rights in any forum whatsoever.

Given the high stakes these cases present, both employer and employee positions have garnered a large number of friend-of-the-court briefs before the Supreme Court. The Chamber of Commerce has weighed in on the employers’ side, as have other groups representing industry and the defense bar. The Justice Department, which had originally represented the NLRB, switched sides with the change in presidential administration and is also supporting the employers.

Meanwhile a group of ten labor unions pointed out that given the economic power employers wield over employees who need jobs to support their families, “few workers are willing to put a target on their back by bringing legal claims against their employer on an individual basis.” The NAACP Legal Defense Fund and more than 30 other civil rights groups, including Public Justice, explained how joint legal action has unearthed patterns of discrimination and brought about systemic changes in workplace policies that individual cases could never have achieved, listing 118 concerted legal actions challenging discrimination based on race, gender, age, disability and sexual orientation that would not have been possible under concerted action bans like Murphy Oil’s. The National Academy of Arbitrators disputed the employers’ premise that joint or collective claims can’t proceed in the more streamlined forum of arbitration, noting that labor arbitrators have been resolving group claims in unionized workplaces for decades and that requiring each case against the same employer – with the same evidence – to proceed separately would actually be far less efficient and more costly. Finally, the Main Street Alliance argued that concerted action bans reduce enforcement of minimum wage and employment discrimination laws, which disadvantages responsible businesses relative to corporations that mistreat employees and break the law.

With nearly a quarter of U.S. non-union employees already subject to concerted action bans, a green light from the Supreme Court telling employers to continue this practice will no doubt cause that figure to soar. But Public Justice is hopeful that the Court will follow the plain meaning of the NLRA and find these bans to be the illegal acts that they are—attempts to coerce employees into giving up their right to join forces to increase their bargaining power. That right applies equally whether employees want to join a union, join a lawsuit or join a boycott or picket line. The Supreme Court should stop this employer power grab and reaffirm the right to concerted activity, which is just as important for workers now as it was when Congress established it over 80 years ago.