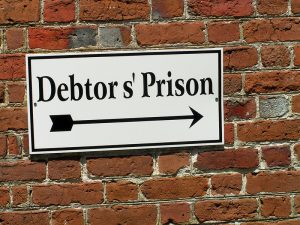 The City of Montgomery, Alabama and its contractor, for-profit probation company Judicial Correction Services, “pocket[ed] millions” while knowingly “perpetuating a cycle of debt and unlawful imprisonment.” That’s how federal judge Royce Lamberth described the system under which hundreds of low-income municipal court defendants were jailed for being too poor to pay traffic tickets and other fines. On July 7, 2020 in Carter v. Judicial Correction Services, the U.S. District Court for the Middle District of Alabama ruled that there is enough evidence for our lawsuit against the City, JCS, and a City-hired contract criminal defense attorney who participated in the scheme to go forward to trial, paving the way for the victims to finally get justice.

Public Justice’s Debtors’ Prison Project and the Evans Law Firm of Birmingham represent Aldaress Carter, who filed suit several years ago on behalf of all similarly-situated JCS probationers in Montgomery. Because he couldn’t afford to pay fines from traffic tickets up front in one lump sum, Mr. Carter was sentenced to JCS-supervised probation. JCS’s system was “offender-funded,” meaning the company didn’t charge the City a penny for its debt-collection services. Instead, Mr. Carter and other probationers were ordered to pay $40 every month in probation fees on top of their underlying fines. It was a lucrative business model: JCS took in over $15 million in fees in Montgomery alone—and almost $60 million statewide before it was forced out of Alabama.

Mr. Carter worked hard to make his payments, because JCS had threatened to have his probation revoked if he didn’t pay. At one of his appointments, the JCS probation officer pointed to a nearby uniformed police officer and told him that if he didn’t bring enough money, he’d be taken to jail. During the 19 months he spent on probation, Mr. Carter attended 66 appointments and paid over $800 to JCS—nearly $375 of which JCS pocketed for its fees. But eventually, like many people, he fell behind. That’s when JCS petitioned the court to revoke his probation, and a warrant was issued for his arrest.

Mr. Carter was arrested. And when he went back before the municipal court and couldn’t pay the remaining debt, the court “commuted” his fines to days in jail at the rate of $50/day, then jailed him without ever conducting a hearing on his ability to pay. Mr. Carter spent four days behind bars before finally being released after his mother borrowed money to pay the balance of his fines. He was just one of hundreds of people jailed for failure to pay in Montgomery.

In a thorough and at times scathing opinion, the court rejected JCS and the City’s arguments that there was no evidence of their culpability in the alleged scheme. The court held that the Montgomery Municipal Court “engaged in a systemic practice of jailing traffic offenders for failing to pay fines without inquiring into their ability to pay” and “deprived offenders of their due process and equal protection rights not to be incarcerated for their poverty”—and that there is sufficient evidence to hold both JCS and the City liable for the violations:

“JCS ran a business premised on the fact that many traffic offenders in Montgomery could not afford to pay their fines. They extracted as much as they could from probationers—some of whom they knew to be disabled, unemployed, or dependent on government benefits—and then tossed them back to the Municipal Court. That court, in turn, routinely jailed traffic offenders without inquiring into their ability to pay their fines. And if the City knew what was happening and did nothing to stop it, the City is liable as well. They cannot point the finger at the municipal court and feign innocence. For JCS and the City to walk out of the casino professing shock that gambling was occurring while pocketing millions in winnings beggars belief. . .  [T]he record strongly suggests that they knew they were perpetuating a cycle of debt and unlawful imprisonment.”

The court’s decision in Carter is important in a number of ways.

First, the court held that based on the evidence in the record, a jury could find that JCS “funneled indigent [probationers] into jail regardless of their ability to pay,” in violation of their Fourteenth Amendment due process and equal protection rights. This makes sense: evidence from JCS’s own records shows that the company was aware that many probationers were receiving SSI (Supplemental Security Income) or other benefits. In fact, JCS kept logs of the dates on which probationers would be receiving their poverty benefits. So when JCS sought to revoke people’s probation for failure to pay—leading to their jailing—it was with knowledge that nonpayment was due to poverty, not willful refusal. The court also ruled that “JCS cannot shift its responsibility” for the constitutional violations onto the municipal court, because the court’s actions (granting JCS’s petitions for revocation of probation and jailing probationers) were foreseeable.

Second, the court ruled that there’s sufficient evidence for a jury to hold Montgomery responsible as well. After entering into the contract with JCS, the City became aware of the problematic practices as lawsuits alleging unlawful jailing piled up. But instead of terminating its contract with JCS, the City kept renewing it; JCS kept collecting millions in fines and fees; and people like Aldaress Carter kept going to jail. By doing nothing to stop the unconstitutional practices, the court reasoned, City policymakers acquiesced in them. This is critical, because local governments increasingly outsource functions of the criminal justice system to for-profit businesses. If cities can be held liable when their contractors violate the constitution, it will be in their self-interest to make sure people’s rights are not violated.

The court also ruled that the evidence shows the City failed to fulfill its obligation of providing adequate counsel for Carter and other municipal court defendants, in violation of their Sixth Amendment rights. The court’s ruling on this point is important, because it means cities have a duty to do more than provide “nominal” representation for large numbers of defendants who are facing the risk of jail. The court also ruled that a jury could find the contract defense attorney who met with Carter—and asked him only whether he would “pay” or “stay” in jail—deprived probationers of their right to counsel by failing to advocate for their right to a hearing on ability to pay. That attorney wasn’t even standing before the judge with Mr. Carter when Mr. Carter’s fines were commuted to days in jail.

Finally, the court rejected numerous arguments by the defendants that they should be immune from suit or that the court lacked authority to resolve the claims.

This victory was a team effort. Debtors’ Prison Project Attorney Brian Hardingham and I took the lead on the briefs, with assistance from Alexandra Brodsky and Adrienne Spiegel and strategic input from our wonderful co-counsel, Danny Evans, Alexandria Parrish, and Maurine Evans of the Evans Law Firm. We are also extremely grateful to Civil Rights Corps and the National Center for Law and Economic Justice for their assistance and input. And the Debtors’ Prison Project is funded by a generous grant from Arnold Ventures. We are extremely grateful for their support.

Public Justice’s Debtors’ Prison Project is working to end the criminalization of poverty one case at a time. If you’re aware of other examples where people are at risk of being jailed because they can’t pay fines or fees—whether it’s to a private company or government entity—please email me at lbailey@publicjustice.net. And if you would like to support this work, please donate here and indicate that you want your tax-deductible gift to support the Debtors’ Prison Project.