UPDATED: Using Bankruptcy to Eliminate Tort Liability for Future Asbestos Claims? That Would Be Unconstitutional

UPDATED: Using Bankruptcy to Eliminate Tort Liability for Future Asbestos Claims? That Would Be Unconstitutional

Unfortunately, the district court refused to overturn the bankruptcy court’s order. If allowed to stand, these rulings will enable companies to use the bankruptcy system to avoid ever having to compensate people they poisoned with asbestos. It can take years for those exposed to asbestos to know they’re sick.

Under these opinions, as long as a company gets its bankruptcy in before then, the claims against it are wiped away. And the people who were poisoned? They’re out of luck. They can try to resurrect their claims once they get sick, but they’ll be fighting an uphill battle; they’ll be fighting it while sick; and there’s no guarantee they’ll succeed. The asbestos claimants in this case have appealed the district court’s decision to the Third Circuit. And we filed an amicus brief in support of their appeal, authored by Michael Quirk of the Berezofsky Law Group (which has recently merged into Motley Rice).

Our brief argues that the district court was wrong to prohibit the asbestos claimants from appealing the bankruptcy court’s order; that wiping away the claims of workers exposed to asbestos before those workers even know they’re sick is unconstitutional; and that permitting bankruptcy courts to do so will incentivize solvent companies to abuse the bankruptcy system to avoid their liability to people they’ve injured. We’re hopeful that the Third Circuit will reverse. 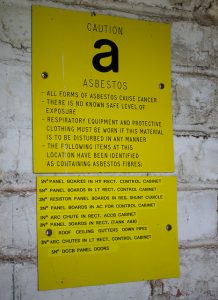 Last week, the Delaware district court heard arguments in In re Energy Future Holdings, an asbestos bankruptcy case that could have a lot to say about constitutional due process.

Resolving asbestos liability can be challenging. The time between exposure to asbestos and the onset of the most deadly asbestos-related disease, mesothelioma, can be decades, and there’s no way for someone who was exposed to know whether they will fall ill in the future. And there are plenty of folks—many of whom were exposed indirectly, through asbestos on a family member’s clothing, for example—who may not even know that they were exposed in the first place. As such, it’s impossible for anyone—including companies responsible for asbestos exposure—to know who will fall ill and be entitled to compensation in the future.

Unsurprisingly, that impossibility presents problems for companies that have filed for bankruptcy. One of the key purposes of bankruptcy is to finally satisfy a company’s creditors as its assets allow, so that the company can either liquidate and cease to exist or start over fresh without debt. But it’s hard to achieve finality when you can’t know who all the creditors are— and in asbestos cases, that means who the people are who will fall ill in the future, (or, the future asbestos claimants).

And you can’t simply proceed with bankruptcy as if those claims don’t exist. Future asbestos claimants (whoever they are) have a live property interest in their claims, and a company or court can’t eliminate those claims without providing constitutional due process. Sufficient due process, though, is virtually impossible to provide when the claimants at issue are unknown even to themselves. That’s what the Supreme Court indicated in Amchem Products, Inc. v. Windsor, in the context of future asbestos claimants.

Fortunately, Congress has provided a way forward. 11 U.S.C. § 524(g) sets up a ready-made way for companies to achieve the needs of finality in bankruptcy without violating the constitutional rights of future asbestos claimants. Among other things, the statute provides that future claimants be represented in the bankruptcy proceeding, be awarded compensation commensurate with current claimants—those who are already ill and can be identified—and provides for setting up a trust from whence future claimants can draw compensation.

In In re Energy Future Holdings, however, the supposedly bankrupt companies did none of those things. They rejected the suggestion that they follow the 524(g) procedures, arguing that it was more expensive to do so (not, though, that it was too expensive for the company to pay). Instead, the proposed bankruptcy plan, accepted by the bankruptcy court, set a bar date, a date by which any claimant, including future claimants who currently have no signs of illness but remain at risk of developing serious health issues down the road, had to file a claim in bankruptcy or lose it forever. A bar date is extremely problematic for future claimants because they don’t know who they are and may not even know that they were exposed—the very problem identified by the Supreme Court in Amchem. Indeed, there are no other cases in which a company that knew there were future asbestos claimants was permitted to cut off future claims and ignore the 524(g) process.

A group of individuals who were diagnosed with mesothelioma since the bar date have appealed the bankruptcy court’s approval of the In re Energy Future Holdingsplan, arguing, among other things, that the plan’s bar date is simply unconstitutional—the fact that it would have been more expensive to comply with the Constitution does not mean the Constitution can be violated.

Public Justice filed an amicus brief, co-authored by Michael Quirk of the Berezofsky Law Group, supporting the future asbestos claimants. Our brief argues that, aside from being unconstitutional, the bar date would also have the practical impact of denying a substantial number of extremely ill individuals and their families any compensation. Further, affirming the bankruptcy court’s plan approval would encourage companies to enter bankruptcy as a way to eliminate liability for any future asbestos claims, not because they were actually bankrupt—a prediction well-supported by the facts here.

On Thursday, the district court heard arguments on the appeal, and we hope for a reversal soon. The court’s ruling will have a major impact on untold numbers of people who may not yet know they will benefit from a victory in this appeal, but for whom that victory could make a huge difference in the years to come. The company in question has already jeopardized their health; it should not be allowed to jeopardize their future restitution, too.