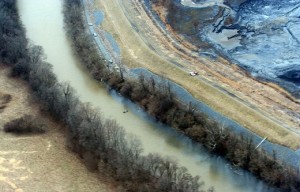 Public Justice’s Coal Ash Litigation Project, part of our Environmental Enforcement Project, protects communities and wildlife from toxic pollution, and forces coal companies to confront and pay the full cost of the damage they do. Below is a brief introduction to how and why we do it.

What is coal ash?

Coal ash is a toxic byproduct that is left over after coal is burned. Coal ash must be disposed of after it has been burned, and coal-burning power plants create a great deal of which they need to dispose.

What is in coal ash that is harmful?

A number of carcinogenic, toxic, or otherwise dangerous chemicals are present in coal ash. These include arsenic, boron, cadmium, mercury, lead, and selenium.

According to the Sierra Club, the threats to communities adjacent to coal ash impoundments include “increased risk of cancer, learning disabilities, neurological disorders, birth defects, reproductive failure, asthma, and other illnesses.” An EPA risk assessment found that living near a wet coal ash impoundment is more dangerous than smoking a pack of cigarettes a day.

What is a coal ash impoundment?

Since the collapse of the dam of a coal ash impoundment in Kingston, Tenn., in 2008, which contaminated thousands of acres and necessitated a $1.2 billion cleanup, power companies started to move away from wet coal ash disposal. This trend was reinforced by the exposure of massive pollution at the largest impoundment in the nation, Little Blue Run in 2012. More recently, a spill of ash into the Dan River in North Carolina has highlighted the hazards of impoundments. However, despite the danger to drinking water sources and freshwater aquatic life that comes from disposing of wet coal ash in impoundments, not to mention the threat contamination poses to the bottom line of power companies since the Kingston disaster, they continue to do it.

How does coal ash get from these impoundments to bodies of fresh water and the water supply?

Water from coal ash impoundments leaks into the ground directly, bringing the toxic chemicals with it. The installation of groundwater monitoring equipment at impoundments, and the use of a device called a composite liner, safeguards which Physicians for Social Responsibility refers to as “rudimentary”, help prevent leakage from coal ash sites that use them. However, as of February 2014, only three states mandate the use of composite liners, and only two require groundwater monitoring systems at wet coal ash disposal sites.

Data released by the EPA in 2012 showed that 535 impoundments, or about 46 percent of those the agency knew about, operated without a composite liner.

Minefills are an alternative route for coal ash disposal in certain regions that have been mined historically. They operate like landfills, but with much less pollution control. For example, minefills do not have liners or any treatment of their drainage beyond sedimentation. Although companies make claims that this filling can reclaim a mine (restore it so that it can be economically or environmentally useful as something other than a mine), there is no data to support the idea that filling can reclaim a mine. Indeed, the National Academy of Sciences pointed to significant risks of pollution from the toxics and other contaminants in coal ash.

After over a decade of taking the lead in challenging the coal industry’s destructive mountaintop removal mining practices in Appalachia, Public Justice’s EEP launched its Coal Ash Litigation Project in 2011. It exists to:

What are the case selection criteria?

The Coal Ash Litigation Project looks for cases where:

Who does Public Justice work with?

One of the less-discussed factors propping up carbon emissions in America is the privilege that fossil-fuel producers enjoy to not have to pay the true cost of producing oil, coal, and natural gas. As Webster and Public Justice Environmental Enforcement Project Director Jim Hecker argued in a blog post written after the Obama Administration put forward its climate initiative earlier this year:

Fossil fuels are currently heavily subsidized because their price does not include the cost of their pollution on the environment. Economists would say that these huge costs are “externalized” – they don’t show up in the price of fossil fuels such as coal, but the costs are still very real. If carbon-based fuels like coal were priced at their actual cost to the world, they would be uncompetitive with cleaner sources of power.

Public Justice’s coal ash litigation project exposes those costs, and makes the power companies pay them. Our successes in taking on the most egregious pollution and polluters is an example of how the civil justice system is helping to chip away at fossil-fuel producers’ privilege, by making power companies face the true cost of using coal for electricity generation, thereby making the costs of renewable sources of energy as competitive as they should be.

Fighting climate change cannot be done by litigators alone. It requires strong government action driven by public outrage. But the work Public Justice does through its coal ash litigation makes power companies face their victims and their damage, and pay to set things right. This project is an example of what must and can be done on a larger scale for the sake of the whole planet.

Our Coal Ash Litigation Project gets results, and helps create a better future for all of us. Will you stand behind it?