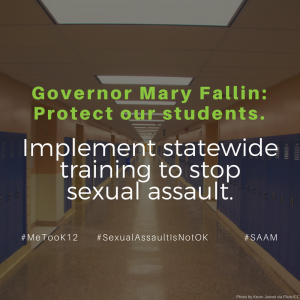 A student at Washington Middle School in Oklahoma was sexually assaulted three times over the course of 18 months by other students – including one incident in which he was restrained by a football player and assaulted by another student as 30-40 other children in the music class watched. Public Justice has filed a lawsuit on behalf of the family, who assert that the district did little to protect their 14-year old son after learning of the bullying, death threats, and repeated sexual assaults.

Unfortunately, this student’s story is not unique. But sexual assault is not “horseplay,” as a principal told the parents of the 6th grader after reporting his assault.

That’s why our client’s family is calling on Governor Mary Fallin to take action and order the state Department of Education to implement statewide training programs to better prepare schools to prevent and address sexual assaults. You can stand with the family by adding your voice to their demand for action that protects Oklahoma students.

If you live in Oklahoma, you can contact Gov. Fallin’s office. You can also send her the message online with these sample tweets:

Hey @GovMaryFallin, #SexualAssaultIsNotOK. Protect our students and require training to stop sexual assault for all schools across Oklahoma. #MeTooK12 #SAAM

Make Sure You Don't Miss The Next Action