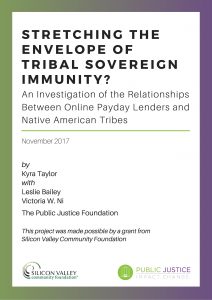 Payday lenders are nothing if not creative in their quest to operate outside the bounds of the law. As we’ve reported before, an increasing number of online payday lenders have recently sought affiliations with Native American tribes in an effort to take advantage of the tribes’ special legal status as sovereign nations. The reason is clear: genuine tribal businesses are entitled to “tribal immunity,” meaning they can’t be sued. If a payday lender can shield itself with tribal immunity, it can keep making loans with illegally-high interest rates without being held accountable for breaking state usury laws.

Despite the increasing emergence of “tribal lending,” there was no publicly-available study of the relationships between lenders and tribes—until now.  Public Justice is pleased to announce the publication of a comprehensive, first-of-its kind report that explores both the public face of tribal lending and the behind-the-scenes arrangements. Funded by Silicon Valley Community Foundation, the 200-page report is entitled “Stretching the Envelope of Tribal Sovereign Immunity?: An Investigation of the Relationships Between Online Payday Lenders and Native American Tribes.” In the report, we set out to analyze every available source of information that could shed light on the relationships—both claimed and actual—between payday lenders and tribes,  based on information from court records, payday loan websites, investigative reports, tribal member statements, and many other sources. We followed every lead, identifying and analyzing trends along the way, to present a comprehensive picture of the industry that would allow examination from several different angles. It’s our hope that this report will be a helpful tool for lawmakers, policymakers, consumer advocates, journalists, researchers, and state, federal, and tribal officials interested in finding solutions to the economic injustices that result from predatory lending.

Under one common type of arrangement used by many lenders profiled in the report, the lender provides the necessary capital, expertise, staff, technology, and corporate structure to run the lending business and keeps most of the profits. In exchange for a small percent of the revenue (usually 1-2%), the tribe agrees to help draw up paperwork designating the tribe as the owner and operator of the lending business. Then, if the lender is sued in court by a state agency or a group of cheated borrowers, the lender relies on this paperwork to claim it is entitled to immunity as if it were itself a tribe.  This type of arrangement—sometimes called “rent-a-tribe”—worked well for lenders for a while, because many courts took the corporate documents at face value rather than peering behind the curtain at who’s really getting the money and how the business is actually run. But if recent events are any indication, legal landscape is shifting towards increased accountability and transparency.

First, courts are cracking down on “tribal” lenders. In December 2016, the California Supreme Court issued a landmark decision that rocked the tribal payday lending world. In People v. Miami Nation Enterprises (MNE), the court unanimously ruled that payday lenders claiming to be “arms of the tribe” must actually prove that they are tribally owned and controlled businesses entitled to share in the tribe’s immunity. The lower court had said the California agency bringing the lawsuit had to prove the lender was not an arm of the tribe. This was unfair, because the lenders, not the state, are the ones with access to all the information about the relationship between lender and tribe; Public Justice had urged the court to review the case and overturn that decision.

In People v. MNE, the California Supreme Court also ruled that lenders must do more than just submit form documents and tribal declarations stating that the tribe owns the business. This makes sense, the court explained, because such documentation would only show “nominal” ownership—not how the arrangement between tribe and lender functions in real life. In other words, for a court to tell whether a payday business is truly an “arm of the tribe,” it needs to see real evidence about what purpose the business actually serves, how it was created, and whether the tribe “actually controls, oversees, or significantly benefits from” the business.

The need for reliable evidence is even more crucial given that one of the companies in the case (as well as defendant in two of our cases) admitted to submitting false tribal testimony to state courts that overstated the tribe’s role in the business. Based on the evidence in People v. MNE, the California Supreme Court ruled that the defendant lenders had failed to show they should have tribal immunity. Now that the lenders’ tribal immunity defense has been rejected, California’s protections for payday loan borrowers may finally be enforced against these companies.

Second, the federal government has been cracking down. The Consumer Financial Protection Bureau recently sued four online payday lenders in federal court for allegedly deceiving consumers and collecting debt that was not legally owed in many states. The four lenders are purportedly owned by the Habematolel Pomo of Upper Lake, one of the tribes profiled in our report, and had not previously been defendants in any known lawsuits related to their payday lending activities. While the lenders will likely claim that their loans are governed only by tribal law, not federal (or state) law, a federal court rejected similar arguments last year in a case brought by the FTC against lending companies operated by convicted kingpin Scott Tucker. (Public Justice unsealed secret court records in the FTC case, as reported here. We’ve previously blogged on Tucker and the FTC case here and here.)

Third, some lenders are coming clean and crying uncle.  In April 2017, in a fascinating turn of events, CashCall—a California payday lender that bought and serviced loans technically made by Western Sky, a business purportedly owned by a member of the Cheyenne River Sioux Tribe of South Dakota—sued its former lawyer and her law firm for malpractice and negligence.  According to the complaint, Claudia Calloway advised CashCall to adopt a particular “tribal model” for its consumer lending. Under this model, CashCall would provide the necessary funds and infrastructure to Western Sky, a company owned by one member of the Cheyenne River Sioux Tribe. Western Sky would then make loans to consumers, using CashCall’s money, and then immediately sell the loans back to CashCall.  The complaint alleges clear that CashCall’s managers believed—in reliance on bad legal advice—that the company would be entitled to tribal immunity and that its loans would not be subject to any federal consumer protection laws or state usury laws. But in general, tribal immunity only applies where the tribe itself—not a company affiliated with another company owned by one tribal member—creates, owns, operates, controls, and receives the revenues from the lending business. And sure enough, courts consistently rejected CashCall’s tribal immunity ruse.

The complaint also alleges that Calloway assured CashCall that the arbitration clause in the loan agreements would be enforceable.  But that didn’t turn out to be true either. Instead, in several cases, including our Hayes and Parnell cases, courts threw out the arbitration clauses on grounds that they required all disputes to be resolved in a forum that didn’t actually exist (arbitration before the Cheyenne River Sioux Tribe) before an arbitrator who was forbidden from applying any federal or state laws.  After losing case after case, CashCall ultimately abandoned the “tribal” model altogether.  Other lenders may well follow suit.

Like sharks, payday lenders are always moving.  Now that the tribal immunity scam’s days may be limited, we’re hearing rumblings about how online payday lenders might attempt take advantage of the OCC’s planned Fintech charter as a path to avoid being governed by state law, including state interest-rate caps and licensing and operating requirements. But for now, the tide seems to be turning in favor of consumers and law enforcement.  Let’s hope it stays that way.